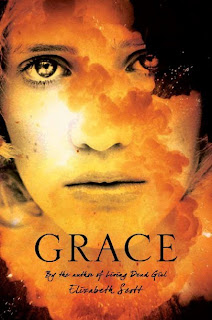 Summary:
From the inside cover:
Grace was raised to be an Angel, a herald of death by suicide bomb. But she refuses to die for the cause, and now Grace is on the run, daring to dream of freedom. In search of a border she may never reach, she travels among malevolent soldiers on a decrepit train crawling through the desert. Accompanied by the mysterious Kerr, Grace struggles to be invisible, but the fear of discovery looms large as she recalls the history and events that delivered her uncertain fate.

Told in spare, powerful prose by acclaimed author Elizabeth Scott, this tale of a dystopian near future will haunt readers long after they've reached the final page.

Review:
Grace is an extremely powerful book. At only 200 pages long, the author manages to tell a very concise story that is both disturbing and heartfelt.

We first meet Grace on a train headed for the border, accompanied by a young man named Kerr. As she travels onward, she muses about what brought her to this point through a series of flashbacks.

Grace lived in the Hills with the People, above the City where Keran Berj rules in a dictatorship. The People are essentially a resistance group bent on taking down Keran Berj, using any means necessary. Boys are trained as soldiers called Rorys, and some girls are trained as Angels-suicide bombers. Grace's father was from the Hills, but her mother was from the City, and so Grace is never fully accepted as one of the People. Her father's disgrace at loving someone from the City that willingly lives under Keran Berj's rule led him to give Grace to the Angels to be trained in that it might gain some respect for their family. Even though Grace is never given the respect that an Angel deserves, she is still devoted to her destiny to die for the cause...until her mission arrives and Grace suddenly realizes she doesn't want to die. She is disgraced and forced to flee, finding a man in the City that can help her get out of the country to a border she's not sure exists.

Grace was actually hard to read at some points, mostly because you can imagine everything you read as frighteningly realistic. To get an idea of how Grace's world is portrayed, think of dictatorships from history and double the scale of atrocities they committed. The People are portrayed to be just as bad, if not worse (the idea that "the best Angels die pregnant"); so in this sense there is no wholly good group looking out for their people's interests, both groups are extremists that use their citizens as means to an end. Grace and Kerr come from both sides in the conflict, and it's interesting to see how they come around to each other and see that they have more in common than they realize.

Grace is a beautifully brutal story of choosing life and survival in a world that sees human life as expendable. Very concise and to the point, the writing in Grace is seemingly simple but conveys universal and complex themes. This book is a gold mine for a book club or a classroom; if this book does nothing else, it will surely make you think.

Recommendation:
Dark and disturbing, Grace is just breathtaking for many reasons, read this!

Thoughts on the cover:
I can't stop looking at this cover, it's what first attracted me to this book, it's freaking gorgeous. The look of Grace's eyes and lips make her look so forlorn but hopeful at the same time. The explosion blended into the image of her face just reinforces exactly what Grace has been trained to do, and what she's been exposed to throughout her childhood.
Posted by Andrea at 6:21 PM