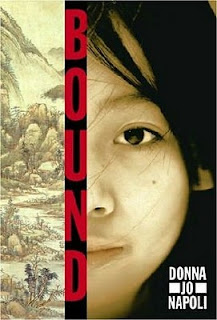 Bound to her late father's second wife and daughter. Bound to a life of servitude as a young girl in ancient China, where a woman is valued less than livestock. Bound to be alone, with no parents to arrange for a suitable husband. Xing Xing spends her days taking care of her half sister, Wei Ping, who cannot walk because of her foot bindings, the painful tradition for girls who are fit to be married. Even so, Xing Xing is content to practice her gift for poetry and calligraphy, and to dream of a life unbound by the laws of family and society.

But all of this is about to change as Stepmother, who has spent nearly all of the family's money, grows desperate to find a husband for Wei Ping. Xing Xing soon realizes that this greed and desperation may threaten not only her memories of the past, but also her dreams for the future.

Review:
I didn't know what to think of this book after I read it, I think it was because I was expecting a typical Cinderella type retelling, but I think Bound works much better simply as a piece of historical fiction rather than a fairy tale retelling.

Bound takes place in the Ming Dynasty (1368-1644 A.D.) and follows young Xing Xing as the Cinderella figure. With her mother dead for years and now her father gone as well, Xing Xing is dependent on her stepmother's kindness to ensure she doesn't end up being sold, so she tries her best to work hard helping her half sister, Wei Ping. Now that the family is on the brink of poverty, Stepmother is determined to find a husband for Wei Ping. The girls' father never allowed their feet to be bound while he was still alive, but Stepmother knows it is nearly impossible to secure a husband for a girl whose feet aren't bound, and thus immediately starts the painful process on Wei Ping soon after her husband's death. Since Xing Xing has no prospects since the death of both parents, Stepmother doesn't bother with binding her feet. With both Stepmother and Wei Ping essentially immobile due to their feet, Xing Xing is left to do everything that requires leaving the cave where they live near the village. Stepmother grows desperate to make Wei Ping's feet ready for the upcoming festival where the prince will choose a wife, and an accident spurs on her decision to actually mutilate Wei Ping's feet. When Stepmother becomes even more cutthroat, Xing Xing decides to attend the festival on her own terms and attracts the attention of the young prince.

Bound makes for a wonderful historical fiction piece but there isn't much here in terms of what we would consider a fairy tale. The "magical" elements relating to Xing Xing's mother's spirit reincarnated as a fish, after which the clothing for the festival is miraculously found isn't so much magical as it is spiritual...and that's pretty much it. There's no fairy godmother figure, the stepmother is really well developed and is more pitiful than villainous (same with the step/half sister figure), and the festival and prince come in at the very end of the book, so it honestly doesn't feel like a Cinderella story at all. Not that I minded much, the story is still great and excellent if viewed as historical fiction.

Thoughts on the cover:
I like the split between the scenery, the title, and Xing Xing's face.
Posted by Andrea at 8:30 PM