I Am Number Four - Pittacus Lore 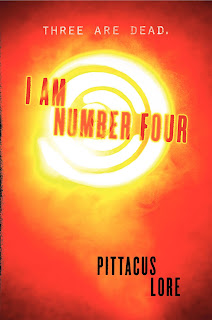 Summary:
From Amazon.com:
Nine of us came here. We look like you. We talk like you. We live among you. But we are not you. We can do things you dream of doing. We have powers you dream of having. We are stronger and faster than anything you have ever seen. We are the superheroes you worship in movies and comic books—but we are real.

Our plan was to grow, and train, and become strong, and become one, and fight them. But they found us and started hunting us first. Now all of us are running. Spending our lives in shadows, in places where no one would look, blending in. we have lived among you without you knowing.

They caught Number One in Malaysia.
Number Two in England.
And Number Three in Kenya.
They killed them all.

I am Number Four.

Review:
I was really hoping this book lived up to all the hype, I really was. Sadly, this book seems like it was made specifically for the upcoming movie: decent yet predictable plot that's mostly action, flat characters, with writing that's mediocre at best.

Number Four and his guardian, Henri, leave Florida and make their way to Paradise, Ohio. Going by the name John Smith, the 15-year-old seamlessly integrates into small town life, all the while being constantly on guard for the Mogadorians, the alien race that drove the group of Loriens from their home planet and still hunts the survivors. Number Four is special however, he and the other Garde children from Lorien spread out all over the world with their perspective guardians will all eventually develop powers called Legacies. It is the hope of their guardians that they can keep the Garde children alive log enough to develop their powers, giving them an advantage in the fight when they eventually return to Lorien. A special spell/charm was developed to help keep the children alive for as long as possible: so long as the nine children are separated, they can only be killed in order of their numbered names. Any attempt to kill them out of order will result in the effect of the offensive attack reflected back on the attacker. As the children are killed in order throughout their years in hiding, the remaining kids develop a scar around their ankles reflecting each life lost. When Number Four develops the third scar on his ankle, he knows his is next, and he and Henri must be even more careful and vigilant than before.

The plot is decent enough and it could've really been a good novel if not for the writing and the characters. The writing feels like a movie script with barely any descriptive writing; everything is told, not shown. Not to mention Number Four has some of the most cheesy lines I have ever read...and not just when he's talking to Sarah either. The characters, with maybe the exception of Number Four and Henri, are complete cliches without any real development. Sarah is the typical "insert love interest here" character, Mark is the quarterback bully that used to date Sarah (surprise surprise), and Sam is the geeky sidekick that just happens to have an interest in aliens and UFOs. The plot is fairly predictable (with similarities to X-Men and Superman), and things seem to come together way too conveniently...like how Henri and Number Four have no issues with money while on the run because when they left Lorien ten year ago their ship just happened to blast off with a supply of diamonds that they sold for money...yeah, like I believe an alien planet just happened to be a source of uber expensive diamonds.

I did like Henri, he was a good father figure and was well-developed. And Bernie Kosar, the dog with the awesome name, was a nice addition too. The novel was a quick read because of the writing style, and will probably appeal to boys because of the emphasis on action and the entire "reminiscent of Superman" thing.

Recommendation:
Good concept, but poorly executed. Will probably appeal to boys due to the content (lots of action scenes). If you're expecting something well written, this probably isn't for you.

Thoughts on the cover:
Eh, it's okay but not great. I do like the logo/symbol they've created and how it appears everywhere, which makes me love the cover underneath the dust jacket (it has the huge symbol embossed in red against the black cover).
Posted by Andrea at 10:22 AM