In Preparation for Mockingjay...

Like everyone else who's knee deep in the world of YA literature, the release of Mockingjay on Tuesday is big news; not quite Harry Potter big, but almost. Well, I can't say that for sure, this is certainly a bigger deal for me than any of the Harry Potter books ever were, but that's just me.

The books are amazing to say the least: I have not encountered a single person who's read them and not fallen in love with them, I have teacher colleagues who are using them in their English classes (for good reasons), and even though the books are YA there are a ton of adults that read them (just like all good YA).

I was giggling with squee-like intensity when I found out my local bookstore was offering a midnight release party, so of course, I am going...and if I see teeny-boppers screaming "Team Gale/Team Peeta!", I will have to seriously fight the urge to smack them, since comparing a decent novel series like this to Twilight is just sacrilege. My local bookstore always puts on really awesome events, so I know myself and my Hunger Games fan of a nephew will have fun, plus I cleared my schedule for Tuesday so I can plow through the thing and get the review posted ASAP (sans spoilers of course).

In preparation for Mockingjay, I did something I have never done...I reread a book (two in this case). I make it a policy of mine not to reread something I've read fairy recently, since I could be reading and discovering something new, and usually I stick to it. However, since reading The Hunger Games and Catching Fire last September, I'd since forgotten basically all the small details...including most of the latter half of Catching Fire, I'm ashamed to admit. So, to ensure I wouldn't be reading Mockingjay with a gobsmacked look on my face because I couldn't remember the events that lead up to it, I reread both books this week, and oh, what an experience it was to repeat.

Some quick thoughts:
(please don't read unless you've read The Hunger Games and Catching Fire, cause here there be spoilers)

- it's amazing how many small details you miss when you read first for plot/story. It's probably obvious for most people, but rereading the books made me realize how many nuances I missed a year ago when I first read them.

- I love Cinna, he's my favourite character in the whole series....and I really hope he's not dead, cause that would actually make me cry.

- I really really hope there's an included map of Panem or at least a better description of where all the districts are in relation to the Capitol, 'cause I was racking my brain trying to figure out how much land mass Panem occupies and how people could walk from one district to another in just a few days time....this was mostly brought on by wondering what body of water District 4 bordered on in order for everyone there to become proficient swimmers. I also love how all the existing fan-made maps in the world of the internet are all concentrated strictly in the US even though the author says Panem occupies the ruins of North America...if it occupied strictly the US, she would have said so.

- I'm willing to consider the whole conspiracy theory that Katniss was chosen on purpose as the symbol for the rebellion (the whole scene where Madge gives her the Mockingjay pin just smacks of pre-planning); though there are people out there in the world of the internet that claim that Katniss was groomed for this role since birth and that all the daddies of District 12 were in on it and they specifically groomed their children as tributes in order to subvert the Capitol and all that as is described in the books. I find it hard to believe that any of the fathers would purposely want their children to participate in the games on the off chance that they would win. If anything, I think the whole thing might have started as soon as Katniss volunteered to take Prim's place and people realized she had a chance at winning, hence the Mockingjay pin and Cinna requesting to be stylist for District 12 and so on. And for those people who say that the reaping was rigged in the first place to select Prim so that Katniss would volunteer for her, I would consider that the reapings could be rigged....but then why have the system of tesserae in the first place and give people food in exchange for more entries if you're just going to essentially choose your tributes anyway? It makes no logical sense...

- people who read way too much into books really amuse me (see discussion point on semi-conspiracy theories above). The site where I found most of these is from here: Hogwarts Professor where they discuss everything from their "Pearl Plot" to the alchemical formula employed by the author in constructing the book. If there's one thing I learned from being a literature major and a teacher is that anybody can read and interpret anything from any book. If a person's intelligent enough they can make links to anything from the simplest sentence, so I tend to not pay too much attention to them. Reading between the lines to make sense of themes is one thing (like comparing the Capitol to the United States and the Districts to the rest of the world in terms of wealth and distribution of resources), but when people start referring to Peeta as a Christ-like figure and Katniss as a hermaphroditic entity because Gale (Nature) and Peeta (Spirit) fuel her, I start to turn off. These speculations are very interesting, and are great if you're trying to write some kind of in-depth research paper on symbols and character archetypes of dystopic YA literature, but I'm reading this for pleasure, and perhaps a teeny bit of enlightenment, not to revisit the Christ-like character (I should know, I wrote a few papers on Christ-like characters in university). Over-analyzing something is the best way to kill the enjoyment it brings you...which is the very reason why I can't read simple fairy tales ever again (thank you Children's Lit class for making me equate Little Red Riding Hood with sex-crazed rapist wolves). Plus, Mockingjay isn't even out yet....the author is probably reading posts like these and laughing her ass off at us for trying to interpret something that's completely off base.

- I'm so excited for Mockingjay that I'll actually be happy when it's all over because then I can regain my reading life, which has been on hold because I can't seem to get into any book due to my insane excitement.

- I really, really want a Mockingjay pin like in the books, if for nothing else than to just wear it or put it on a bag and see who knows what it is.

- seeing all these thoughts outside of my head really reinforce how much of my life these books have overtaken this week!


So yes, Mockingjay will be quite the event. Expect a report on the midnight release party I'll be attending Monday night, as well as a review of Mockingjay itself within a day or so of its release. 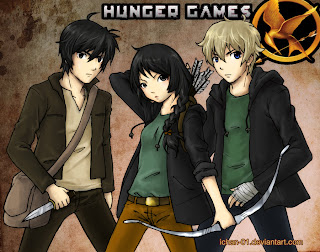