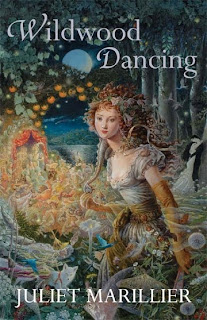 Summary:
From the author's website:
There are many mysteries within the wildwood. Jena and her sisters share the biggest of all, a fantastic secret that enables them to escape the confines of their everyday life in rural Transylvania. They have kept it hidden for nine long years.

When their father falls ill and must leave their forest home over the winter, Jena and her oldest sister Tati are left in charge. All goes well until a tragic accident allows their over bearing cousin Cezar to take control. The appearance of a mysterious young man in a black coat divides sister from sister, and suddenly Jena finds herself fighting to save all she holds dear. With her constant companion Gogu by her side, she must venture to realms dark and perilous in her quest to preserve, not just those she loves, but her own independence as well.

Review:
An adaptation of the Grimm fairytale The Twelve Dancing Princesses, Wildwood Dancing came highly recommended as an excellent example of a fairy tale retelling. Wildwood Dancing adds so much to the original fairy tale that it's almost unrecognizable once you start reading it, but I'm not complaining, The Twelve Dancing Princesses didn't exactly have a lot of plot going on to begin with. Jenica ("Jena") and her 4 sisters Tatiana (Tati), Iulia, Paula, and Stela live in renaissance era Transylvania at their castle home, Piscul Dracului. They discover the magical realm of the Wildwood, which they enter from a portal in their bedroom. Years later, the sisters travel to the Wildwood every full moon and dance the night away, always mindful of the rules to keep their feet firmly planted in their own world without getting lost to the temptations of the Wildwood. One winter, their father takes ill and must leave their home to recover, plus their uncle dies from a hunting accident. With both male heads of the family gone, and with their mother long-dead, Jena and her sister Tati are left in charge until their father returns. Their cousin Cezar tries to exert his control over the family since he believes that women are inferior, and also wants to take his revenge on the Wildwood and its supernatural inhabitants for causing the death of his brother Costin 10 years earlier. Jena has other problems too; the Wildwood has been visited by the Night People (read: vampires) and Tati falls madly in love with one of them. Jena knows to leave them well enough alone but fears for Tati and the love that can never be. So between trying to find a suitor so one of the sisters can marry and produce an heir to get rid of Cezar and finding a way to save the Wildwood from their cousin and the Night People, Jena has a lot of issues on her plate.

It took me a while to get into the book, but by the time their father left and the Night People arrive in the Wildwood, I was hooked. I identified with Jena right away since she's the sensible sister, and wanted to slap Tati because she reminded me of a Jane Austen heroine who wastes away due to love....I hate Jane Austen heroines. I loved the plight of the sisters because they wanted to keep the independence their father allowed them, and were even willing to find a husband and get pregnant to do so....kind of ironic, but it's the 1500's, I'll forgive them. The Night People were a nice addition and were traditional vampires instead of the feminized vampires of YA books of late, plus Tadeusz was just brilliantly nasty, I loved him. Having Gogu as the little sidekick was super cute, especially since he was a frog, who doesn't love a good talking animal sidekick? The story is wonderfully crafted, the prose is beautiful, and the characters are endearing, all in all an excellent fairy tale retelling, same verdict as everyone else who's read this book.

Recommendation:
If you're in the mood for a good example of a fairy tale retelling, read this! This story would appeal to anyone even if you're not a fan of traditional fairy tales since there's so much more content added here.

Thoughts on the cover:
Gorgeous. Every piece of the cover means something, so I ended up flipping back and forth every time I read something that I remembered seeing in the cover image.
Posted by Andrea at 9:12 PM