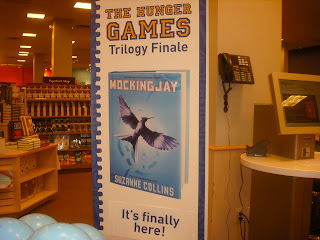 All the gear-up for Monday night was well worth it, the Mockingjay midnight release party was well done and uber fun to boot ^_^ First off, I have to say that the staff at Chapters Burlington (my local store) did an amazing job in organizing and executing this event. Everyone was enthusiastic and in costume (they'd get props from me just for going in costume), and everything was handled wonderfully, my nephew and I were out within minutes of midnight, yay for efficiency!

After arriving at 10pm, we were greeted by staff in costume and directed to the central table to pick up our survival passport to sign and take to each of the stations to get stamped. All the completed passports were eligible for a draw to win the first copy of Mockingjay, complete with a signed bookplate by the author! This is significant because the author (Suzanne Collins) has a hand injury and doesn't autograph her books normally (she uses a pre-made signature stamp), but as a special promo for Mockingjay, she personally hand signed numerous book plates (stickers) and one was sent with every event kit that the bookstores having a midnight release party received. Of course neither me or my nephew won it, a lucky girl did, I just hope she realizes the significance of how lucky she was to win that ^^;

Anywhoo, so we went from station to station, starting with Peeta's Bakery where we got to decorate cupcakes. My nephew was looking forward to this the most, so we went there first. Sadly, there was no stamp credit for doing this, but they were darn tasty so we didn't care, we need no incentive to eat cupcakes. We did the trivia stations afterward (Food and Matches) to get our first stamps, and thankfully I reread the books earlier this week, or else I would've been screwed. We went to the Medicine station next, where we had to match the descriptions of the medicinal uses of plants to the physical plants in front of us. Then came the Weapons station where we made knots out of pieces of licorice, that was fun, we ended up helping other people in line cause we clued into the knots pretty fast. Lastly came the Water station, which was a ring toss over full bottles of water. Thankfully we didn't have to actually get a ring over a bottle to get our stamp, or else we would've been there for quite a while, we both admitted we suck at the ring toss ^^; 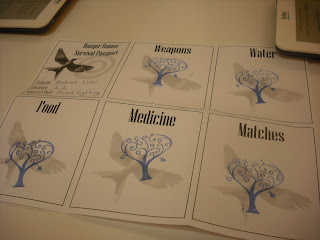 After we finished the stations and were entered into the draw, we browsed around since we had lots of time before we had to line up. We went to the tribute preparation station where my nephew got his hair spray painted purple to match his shirt. We went to see Liz, a local artisan who made Hunger Games inspired jewelry! She had Mockingjay pins and necklaces (I bought one of the pins), plus Katniss and Peeta bread/pita keychains (they were squishy ^_^), as well as Rue's necklace, "Peeta's Pearl" necklace, and a "Girl on Fire" necklace. She made such wonderful stuff, I wish I wore more jewelry, but she had plenty of girls buying her pieces. Go see her website if you want to see examples of her wonderful work: Meister Artisan Jewellery 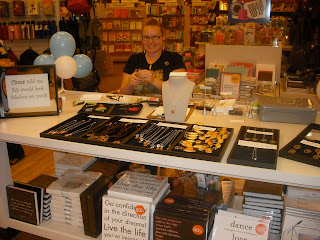 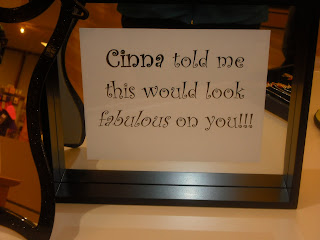 After buying a book I've been trying to find for a while, as well as The Ask and The Answer finally in paperback (reviewed back in January), we looked at the wall of Hunger Games merchandise including stickers, buttons, mockingjay brooches, magnets, tote bags, bookmarks, bracelets, and the Training Games card game (which we kinda balked at for a while). After that, it was time to line up, so my nephew and I waited for a little while and talked to the other people in line. Right at midnight they started letting people up to cash where they had the books behind the counter. It was all amazingly quick and my nephew an I were out of the store with our copies mere minutes after midnight, so we were happy.

Here's the "stuff shot" from the night: the red bookmarks from Scholastic that they handed out to us in line, the book itself (it matches the shiny look from the other two books, hence the shine on camera), the mockingjay temporary tattoos from the costume station, plus Liz's mockingjay pin from her jewelry booth. 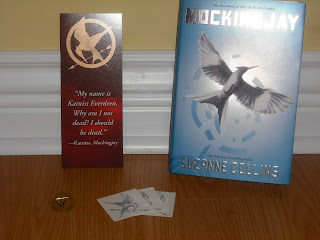 Was also pleased to find out (via bookmarks inserted in copies of Mockingjay) that the same Chapters is hosting another teen preview night like the one I attended back in late April, this time from Simon & Schuster (last time was Harper Teen), so you can bet I'll be going to that one in a couple weeks.

All in all, it was a wonderful night. I only got about 6 chapters into Mockingjay and succumbed to sleep at 3am, but I'll continue reading today, so expect a review either later today or tomorrow.
Posted by Andrea at 9:18 AM