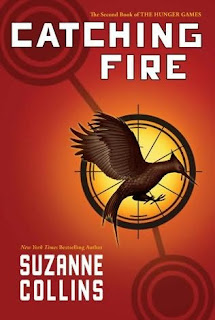 Summary:
From the publisher:
Against all odds, Katniss Everdeen has won the annual Hunger Games with fellow district tribute Peeta Mellark. But it was a victory won by defiance of the Capitol and their harsh rules. Katniss and Peeta should be happy. After all, they have just won for themselves and their families a life of safety and plenty. But there are rumors of rebellion among the subjects, and Katniss and Peeta, to their horror, are the faces of that rebellion. The Capitol is angry. The Capitol wants revenge.


Review:
Since I devoured The Hunger Games a few days after Catching Fire was released, picking up this one was not just a passing fancy, it was a necessity! I HAD to read the continuation, an urge I don't get all that often with sequels.

Catching Fire was a constant surprise. Again, I tried to guess where the plot was headed while I was reading and was wrong every time. I knew a rebellion in the districts was going to be a focus in this series, but I assumed it would be established somewhere in the first book. In Catching Fire, the rebellion comes up around Katniss and Peeta's heads without them really intending it. Even then, the rebellion is very much something going on in the background while you're focusing on what's happening to Katniss, though there are parts that pop up to remind you that it is indeed happening. I was never quite sure what Peeta's feelings were regarding his involvement, his true motivations are very shrouded throughout both books, part of that is probably because Katniss is narrating and we never really figure out what he's thinking (except I'm pretty certain by this point that he truly does love Katniss).

The second half of the book blew me away. I think I read it continuously without a break because I could not believe the direction the plot took. I love the relationship between Katniss and her stylist Cinna, the gentle way he regards her is very touching; and not to mention he creates her whole image of "the girl on fire", which pops up again in this book. I actually cried during the scene where Cinna redesigns Katniss' dress and what came after it, and I was amazed that I had gotten so emotionally attached to his character.

Characters are fleshed out even more so in this book. Katniss becomes slightly less hardened and begins to open herself to others, especially Peeta. Peeta's actions are geared towards doing what he believes is best for Katniss (at least we're lead to believe so), so I can't help but like him for his sincerity and dedication. Even Haymitch has his redeeming moments, and I'm glad the author included a scene explaining how he won in the past Hunger Games.

I was angry when I finished the book because it ended with a cliffhanger, which made me want the third book to magically appear out of thin air so I could read it right away instead of waiting another year for it!

In short: another engaging plot with plenty of twists, the writing is beautiful yet again, and it leaves you wanting more.

Recommendation:
If you read The Hunger Games and liked it, reading this is a no-brainer.

Thoughts on the cover:
The mockingjay makes an appearance again, this time against a crimson background to add to the fire images that run rampant in this book. It would be nice to keep the continuity for the third book (mockingjay in a different position against a different colour).
Posted by Andrea at 5:00 PM