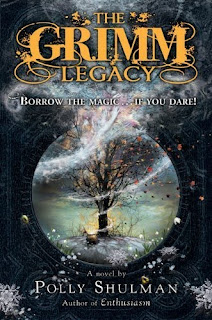 Summary:
From the author's website:
What if fairy tale magic really existed?

Lonely at her new school, Elizabeth takes a job at the New York Circulating Material Repository, hoping to make new friends as well as pocket money. The Repository is no ordinary library. It lends out objects rather than books—everything from tea sets and hockey sticks to Marie Antoinette’s everyday wig.

It’s also home to the Grimm Collection, a secret room in the basement. That’s where the librarians lock away powerful items straight out of the Brothers Grimm fairy tales: seven-league boots, a table that produces a feast at the blink of an eye, Snow White’s stepmother’s sinister mirror that talks in riddles and has a will of its own.

When the magical objects start to disappear, Elizabeth and her new friends embark on a dangerous quest to catch the thief before they’re accused of the crime themselves—or the thief captures them.

Review:
Anytime I read a book that takes place in a library, there's a really good chance I'll love it to pieces. The Grimm Legacy is just such a book. Elizabeth Rew's situation may as well be from a fairy tale: her mother has passed away, her father has forgotten she exists, her stepmother ignores her, her stepsisters are thankfully away at college, and she's had to switch schools in order for the family to afford tuition for said stepsisters. After she writes a paper on the Brothers Grimm for her social studies class, Elizabeth gets an unusual job offer to work as a page at the New York Circulating Material Repository, a library of objects rather than books (eg. Marie Antoinette's wig, Abe Lincoln's hat). She is soon told of an even more unusual part of the repository: the Grimm Collection. Flying carpets, Sleeping Beauty's spindle, the magic mirror from Snow White, boots that allow you to walk seven leagues in a step, all of these and more are found in this secret collection. When it is discovered that someone, or something, is stealing the magical objects form the Grimm Collection and replacing them with non-magical fakes, Elizabeth and the other pages, Aaron, Anjali, and Marc, set out to find the culprit.

I can't express how much I adored this book. The story comes together kind of conveniently and it doesn't take a rocket scientist to figure out what's going to happen, but this is one of those cases where the beauty of the story is in the details and the world building rather than the plot itself. The author could've written a book just about the repository without any traditional plot and I would've loved it: the setting and the whole build-up of the library is just astounding, it make the geek in me giddy. I would've appreciated an appendix of the call system they use and all the objects they mentioned in the book, just because they mention so many things in passing, but again that's the geek in me that likes appendices and glossaries and indexes. Aside from the setting (which I could go on about forever), the characters were really appealing. Elizabeth is a typical female protagonist, she's smart and likeable, though there were a few times I wanted to smack her on the head and tell her to smarten up and just listen to Aaron. Aaron on the other hand is caustic and incorrigible (and a bit of an ass), but in a charming way; he reminded me a lot of my husband, he may as well of been the teenage version of him. The adult characters were well written too: Mr. Mauskopf and Dr. Rust reminded me of your stereotypical sweet, academic professor types, so I loved them automatically, and Ms. Callender is just sweet period. The other thing I liked was the fact that the cast of characters are multi-cultural: Marc is black, and his little brother Andre is just the cutest thing ever; and Anjali and her sister Jaya are Indian.

Not only are the characters likeable and the setting is something out of my best daydreams, but the writing's good too. When I finished the book, I was, and still am, willing to give my right arm for this to be made into a series (it's just a one-shot so far), this book just begs to be continued. Also, a thank you to the author for the stained glass windows and elaborating on The Garden of Seasons, it's like she read my mind!

Recommendation:
Just read this, trust me.

Thoughts on the cover:
I love the cover, but it doesn't really fit the feel of the story, this cover seems appropriate for a darker book, but I didn't think it appropriate, though it is pretty. Also, my mind just wants to call this novel The Grimm Collection instead of The Grimm Legacy; the given title, like the cover, doesn't feel appropriate for the story....but it could be just because they refer to the Grimm Collection so many times it just becomes the first thing that comes to mind when I think of the book itself.
Posted by Andrea at 7:20 PM