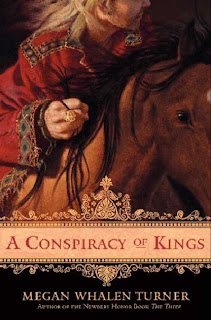 Summary:
From Amazon.ca:
Sophos, under the guidance of yet another tutor, practices his swordplay and strategizes escape scenarios should his father's villa come under attack. How would he save his mother? His sisters? Himself? Could he reach the horses in time? Where would he go? But nothing prepares him for the day armed men, silent as thieves, swarm the villa courtyard ready to kill, to capture, to kidnap. Sophos, the heir to the throne of Sounis, disappears without a trace.

In Attolia, Eugenides, the new and unlikely king, has never stopped wondering what happened to Sophos. Nor has the Queen of Eddis. They send spies. They pay informants. They appeal to the gods. But as time goes by, it becomes less and less certain that they will ever see their friend alive again.

Across the small peninsula battles are fought, bribes are offered, and conspiracies are set in motion. Darkening the horizon, the Mede Empire threatens, always, from across the sea. And Sophos, anonymous and alone, bides his time. Sophos, drawing on his memories of Gen, Pol, the magus—and Eddis—sets out on an adventure that will change all of their lives forever.

Review:
I read the first three books in The Queen's Thief series back in January, and it's quite a unique set of books. Full of political intrigue, themes of appearance versus reality, and a really charming main character named Eugenides ("Gen"), these books really draw the reader in for a satisfying story. However, there were certain sections in each book that I just ended up skipping because they didn't have any impact on the overall plot in my opinion, and didn't detract from my appreciation of the story by skipping them (except in the third book, The King of Attolia, that whole book was just many kinds of awesome from cover to cover). A Conspiracy of Kings is no exception. It has the same elements of the previous books and concludes the political story set up over the past three books, except this time it's told from Sophos' point of view, who readers haven't seen since the first book, The Thief. Eddis and Attolia are now allied through the marriage of Eugenides and the Queen of Attolia, but there is still the kingdom of Sounis to consider, as well as the constant threat from the Mede. Sophos, heir to the throne of Sounis, is thrown into chaos when his uncle, the king of Sounis, dies and he becomes the King. He doesn't get a chance to reign however, because he gets captured and held prisoner in his own land. He escapes to Attolia and asks for aid from Eugenides. Thinking of Gen still as his old friend from before either of them were royalty, he is shocked to find that Gen is cold and calculating...or is he?

The narration alternates between Sophos personally and an omnipresent third person, and the part I ended up skipping was the later half of the first section where Sophos describes his imprisonment. It could be that I knew the political climate of the story and thought that part was to the point of overkill...could also be because I just wanted to get to Eugenides, but either way, things picked up when Sophos was in Attolia learning about what it means to be a ruler and reflecting on if he can afford to be true to himself and be a kind ruler or be ruthless and save his kingdom from invasion and civil war. It's that old question of whether it's better to be feared or respected, and it's illustrated quite well here. I think Eddis said it best: "We are not philosophers, we are sovereigns. The rules that govern our behaviour are not the rules for other men, and our honour, I think, is a different thing entirely, difficult for anyone but the historians and the gods to judge." (pg. 295).

Recommendation:
If you're looking for a well-written, politically focused high fantasy, read this!

Thoughts on the cover:
I think my favourite part of these covers is how you can't see the character's whole face, that and the fancy bordering around the title. And yay for good continuation across all 4 covers.
Posted by Andrea at 12:22 PM