The View From Who I Was - Heather Sappenfield 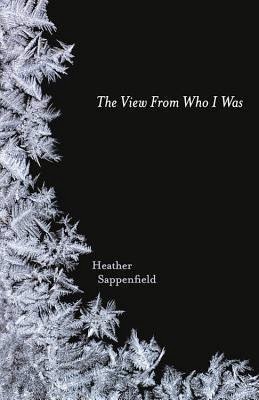 Pain is like water. It comes in different forms.

On a cold Colorado night, Oona Antunes leaves Crystal High's Winter Formal, walks deep into the woods, and lies down in the snow to die.

She awakens in the hospital, suffering the effects of frostbite and hypothermia. But her physical injuries aren't nearly as painful as the wound she can't name, the one she feels cutting deep into the core of who she is.

While recovering from her suicide attempt, Oona discovers that the roots of her problems go beyond herself. To fully understand what happened that night in the woods, she must confront not only her own pain but the hidden past that's suffocating someone she loves.

The View From Who I Was is a story of the damage that can be passed down through the generations, and the healing that can arise from tragedy.

Review:
I picked this up without really knowing what it was going to be like, but I was pleasantly surprised at how engrossing it was.

Oona is the only child of wealthy parents living in Colorado. Her mother is more interested in appearances than spending time with her daughter, and her workaholic Portuguese father is never present physically or emotionally. Oona walks out of her winter formal and lies down outside on a trail near her home and waits to die. At that point Oona's spirit detaches from her body and narrates the story from a first person plural point of view, referring to the physical Oona as "Corpse." Readers get a glimpse at her unhappy family dynamic as the reason for her suicide attempt, and while her mother reforms quite quickly to help her daughter, her father's attempts to be different aren't quite satisfactory. After a stint at a Native American school organized by one of her high school teachers, Oona realizes her father and his troubled past is the main reason for her dysfunctional family, and vows to force her father back to Portugal to confront the events that brought him to America as a child.

The writing style is a bit jarring at first until you realize what's going on with Oona's spirit, but the writing itself is quite eloquent here. Oona is a good student, especially in Science, so she writes a lot about the properties of water in her journal that act as metaphors for herself. The story lags a bit in the middle with the events of the Native American school and Oona's friend Ashley, but things pick up again with her resolve to save her father. The only thing that bugged me was the ending, it didn't quite seem realistic to me. After the stunt her father pulled (can't say much more for fear of spoilers), I definitely wouldn't have been forgiving in the least.

Recommendation:
Definitely worth a read if for nothing else than the unique point of view and the beautiful writing.

Thoughts on the cover:
It's basic but quite appropriate.
Posted by Andrea at 8:18 PM