My Heart and Other Black Holes - Jasmine Warga 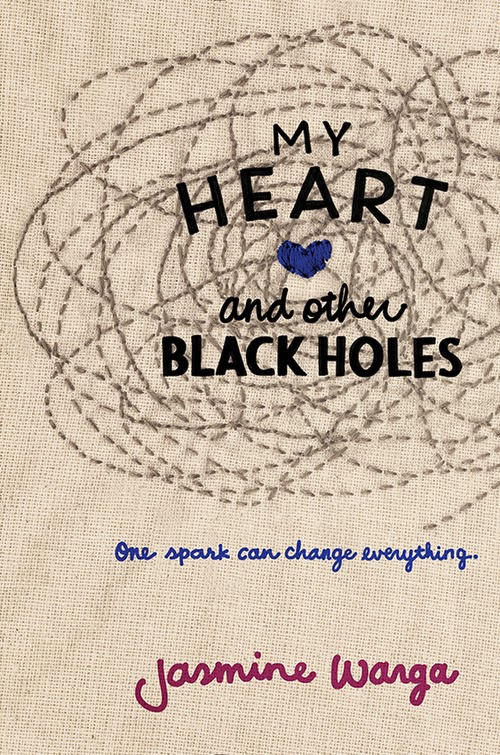 Sixteen-year-old physics nerd Aysel is obsessed with plotting her own death. With a mother who can barely look at her without wincing, classmates who whisper behind her back, and a father whose violent crime rocked her small town, Aysel is ready to turn her potential energy into nothingness.

There's only one problem: she's not sure she has the courage to do it alone. But once she discovers a website with a section called Suicide Partners, Aysel's convinced she's found her solution - a teen boy with the username FrozenRobot (aka Roman), who's haunted by a family tragedy, is looking for a partner.

Even though Aysel and Roman have nothing in common, they slowly start to fill in each other's broken lives. But as their suicide pact becomes more concrete, Aysel begins to question whether she really wants to go through with it. Ultimately, she must choose between wanting to die or trying to convince Roman to live so they can discover the potential of their energy together.

This is a gorgeously written and compulsively readable novel about the transformative power of love, heralding the arrival of an extraordinary new voice in teen fiction, Jasmine Warga.

Review:
I've been on a morbid book kick lately, so I decided to pick this up despite the cliche title. I was surprised by how beautifully written this book was, and it captured me until I put it down.

Aysel is sixteen and very depressed. Her dad is in jail for murder, she feels like she's an intruder on her mother's new family after spending most of her time with her dad after the divorce, her classmates treat her differently because of what her dad did, and she constantly thinks about what would happen if she chose to end it all. When she comes across a website with a section for those looking for suicide partners, she answers an ad from a local poster. He insists that it happen on April 7th, the day his little sister died (less than a month away), and he needs Aysel to convince his mother to allow Roman freedom from her constant supervision. Because they need to appear like they're friends simply hanging out, they spend time together. Aysel learns that Roman blames himself for his little sister's death, loves playing basketball, and is a talented artist. He learns that she loves science and physics, classical music, and even comes to appreciate Einstein because Aysel does. They connect and fall for each other, and even though they both keep reminding themselves of their pact, Aysel becomes less and less willing to follow through.

I like how the author delved into both chemical depression and situational depression. Aysel has what she describes as a black slug inside her that swallows up her happiness, and has since she was a child. Roman only became depressed after his sister's death. It shows that depression can come on suddenly, or it can be something that a person has dealt with all their live and not realize it because it's such a constant for them and they don't know anything different.

The romance between Aysel and Roman happens very gradually even though the novel takes place over the course of about a month's time. They're very sweet together and this is one teenage romance that I can actually root for and think of as a nice model for others (despite the suicide pact that brought them together).

The main theme of the novel is human connection, and what transpires from it. Both Aysel and Roman are broken people who need help, but in finding and confiding in each other, they begin to care about the other to the point where they want each other to live. Aysel sees and loves the rare joy in Roman's eyes when he plays basketball, Roman draws a portrait of Aysel to illustrate how he sees her. Aysel is so afraid of being rejected because of her father's crime, but Roman already knows about it and accepts her as she is.

You can tell the author has experience with suicide, she explains at the end that writing the book was a therapeutic process for her after the death of her friend. The passion for life and human connection comes through here in droves, and you as a reader just reacts with joy when you realize Aysel has turned that point and decides to plan for a future she didn't think she would be around for.

Recommendation:
Although it does deal with some heavy subject matter, this book truly celebrates life. The characters seek help from each other and their families to make it through the long healing process. There are suicide hotline numbers at the back of the book for readers to peruse if needed. It's a beautiful book that grips you and doesn't let go.

Thoughts on the cover:
I love the little swirl on the cover, and it has texture to seem like it was sewn on. It's a good visual representation of the metaphor of how Aysel views herself.
Posted by Andrea at 12:15 PM