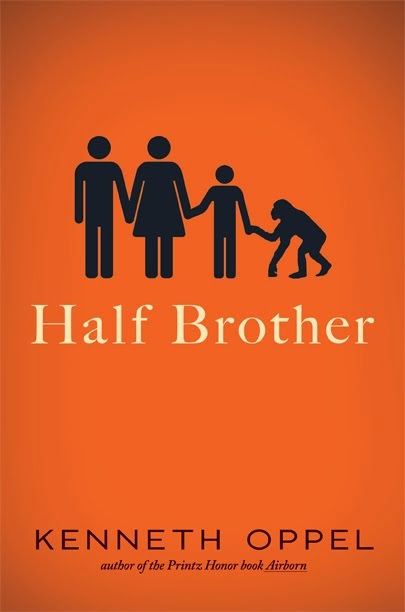 When Ben Tomlin's mother brings home his new "baby brother," and eight-day-old chimpanzee, Ben is far from thrilled. His father, a renowned behavioural scientist, has uprooted the family and moved them to Victoria, B.C., so he can pursue a high profile experiment - to determine whether chimps can learn human sign language. The chimp, named Zan, must be raised exactly like a human. He's dressed in clothes and has a room full of toys and books. As Ben becomes both researcher and adored older brother, Zan becomes a media sensation. But when Project Zan unexpectedly loses its funding, Ben's father is under huge pressure to make the experiment succeed or abandon it - and Zan.

Review:
This is one of those books that I'd been meaning to read for years but never got around to it until now.  The author is a renowned Canadian one (my students of various ages love his books), and I've yet to be disappointed by any of his books, and Half Brother is no exception.

The novel begins in the summer of 1973. Ben has just turned thirteen, and his father has moved the family from Toronto to Victoria in pursuit of a position at the university, one that will fund a controversial experiment. A day after moving into their new house, Ben's mother arrives with Zan, a newborn chimpanzee that the family will raise like a human being in order to see if he can learn sign language. At first Ben is resentful of Zan because he is the reason for their move (that he was not consulted on), but Ben quickly warms to the little guy, and actually loves him as his little brother. The novel covers a two-year period, and as time passes and the experiment is threatened with loss of funding and Zan grows bigger and more dangerous, Ben and his family ask themselves vital questions like what makes a human being, and is it wrong to use animals in testing to benefit humans?

First off, Ben is portrayed quite realistically, which I enjoyed. He's angry at his father for being a crappy dad and having academic expectations of him that he can't fulfill, he wants nothing more than to fit in at his new school, and actually studies the girl he's crushing on in order to have things to talk about with her. He actually has a decent relationship with his mother, and bonds with Zan in a way that is incredibly sweet. He takes on a great deal of responsibility not just with Zan during the experiment, but in caring about what will happen to Zan when it's over.

This book is amazing just for the discussions you could have over the content. Since the book takes place in the 70s, there has been a lot of change in how we view animals and their welfare, but the we still struggle with whether any kind of testing should be allowed on animals. Zan is raised as a human and later essentially discarded to Ben's dismay, which made him raise the question of what makes a human, and does Zan necessitate human treatment because of how he was raised? There's also a great little side plot where Ben tries to be the "dominant male" at the school and in his relationship with Jennifer, which can lead to questions about masculinity and power.

Recommendation:
A very insightful book that is well-written with great characters. And Zan just steals the show, I never thought I'd love a chimpanzee character.

Thoughts on the cover:
Clever, and very appealing to the eye with the orange colour.
Posted by Andrea at 9:35 PM