Playlist for the Dead - Michelle Falkoff 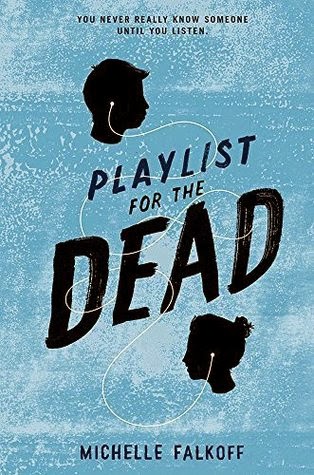 Here's what Sam knows. There was a party. There was a fight. The next morning, Sam's best friend, Hayden, was dead. All he left Sam was a playlist - and a note, saying that he took his own life. But what Sam doesn't know is: why?

To figure out what happened, Sam has to rely on the playlist and his own memory. But the more he listens, the more he realizes that his memory isn't as reliable as he thought. Especially when someone claiming to be Hayden starts sending him cryptic messages, and a series of violent attacks begins on the bullies who made Hayden's life hell.

Same knows he has to face up to what happened the night Hayden killed himself. But it's only by taking out his earbuds and opening his eyes to the people around him - including an eccentric, unpredictable girl who's got secrets too - that Sam will finally be able to piece together his best friend's story.

And maybe have a chance to change his own.

Review:
I won't lie, I picked this up because it reminded me of Thirteen Reasons Why, a book I read years ago and loved to pieces. However, Playlist for the Dead is a very different novel, even though it has a similar premise.

Whenever Sam and Hayden have a fight, Sam always caves and apologizes first. That is how Sam discovered Hayden's body after they fought at a party the night before. Hayden left Sam a list of songs that he claims in a note that Sam will understand if he just listens to it. Sam becomes obsessed with the playlist in his grief, confused over whether it was his fault Hayden killed himself because of their fight, or if it was more about Hayden's older brother Ryan and his buddies who always bullied them. When attacks begin on the "bully trifecta" as they are called, Sam feels that maybe karma has done its job. But when Sam logs onto the online game he and Hayden played, a character claiming to be Hayden says that he is responsible for it all. In Sam's desire to discover exactly what happened to Hayden and who is really attacking the bullies, he realizes that people aren't exactly what they seem, and that you never really know someone until you listen to their whole story.

I really liked how Sam was a realistic character, he was portrayed as a typical fifteen-year-old boy who just lost his best friend in a very traumatic way and is trying to figure out how to resume his life while being consumed with guilt. He didn't grieve in a stereotypical way, or in the way others in the book expected him to, it was very much his own coming to terms with Hayden and his life and those involved in it. You don't see many books that deal with the direct aftermath of a suicide, and this one touched on Sam's experience. I liked how he saw Hayden's suicide as a mystery to unravel, how it was so out of character and he had to figure out what drove Hayden to do it. But in the end, there were many factors and events that could have been the trigger, and perhaps all of them were, and Sam finally admits to himself that if everyone believes they contributed to it in equal parts then no individual person could have stopped Hayden.

I do like how the idea of revenge was included, especially in a book that includes a suicide related to bullying, and how most of the characters ended up having a beef with the bully trifecta that Sam never knew about. I really don't think Ryan and his buddies got what was coming to them despite the attacks on them, and Sam's final conversation with Ryan felt off for some reason, like Ryan's issues were somehow supposed to excuse his cruel treatment of his own brother. Maybe my empathy meter is broken, but I felt nothing for Ryan and his buddies even after hearing their side of the story. I do applaud Sam for his mature reaction at the end, though.

I really enjoyed Sam's self-discovery, what he learns about others, and how he chooses to piece himself back together after Hayden's death, which surprisingly does not include the budding romance between him and Astrid. The songs felt almost unnecessary, they don't really help with much, but perhaps that's because the songs are unfamiliar to me and I didn't look up the lyrics. The songs and all the pop culture references will date the book pretty quickly, I feel the novel could have been written with just as much impact had they not been included.

Recommendation:
A powerful book, but it left me as a reader wanting for some reason I can't explain.

Thoughts on the cover:
I like how they included Sam and Astrid on the cover connected by the earbuds, and the shade of blue is pretty cool.
Posted by Andrea at 1:58 PM