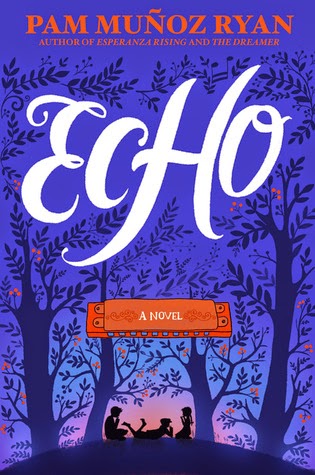 Lost and alone ins a forbidden forest, Otto meets three mysterious sisters and suddenly finds himself entwined in a puzzling quest involving a prophecy, a promise, and a harmonica.

Decades later, Friedrich in Germany, Mike in Pennsylvania, and Ivy in California each, in turn, become interwoven when the very same harmonica lands in their lives. All of the children face daunting challenges: rescuing a father, protecting a brother, holding a family together. And ultimately, pulled by the invisible thread of destiny, their suspenseful solo stories converge in an orchestral crescendo.

Richly imagined and masterfully crafted, Echo pushes the boundaries of genre and form and shows us what is possible in how we tell stories. The result is an impassioned, uplifting, and virtuosic tour de force that will resound in your heart long after the last note has been struck.

Review:
I'm embarrassed to say that this ARC has been sitting on my "to read" shelf since Christmas and I've only just gotten around to reading it, which is sad because I could've read this gem of a book months ago. The book is actually four separate stories that are intertwined via the common element: the harmonica with the letter "M" on it.

Fifty years before World War I, Otto gets lost in a forest playing hide-and-seek with his friends, with only a storybook and a harmonica to keep him company. Soon he meets the spirits of three sisters, princesses, that he read about in his storybook (that writes itself as events involving the sisters transpire) that are under a curse. Their spirits can only reunite with their family in human form if they save a soul on the brink of death while being confined to a woodwind instrument. In exchange for helping him get home, Otto offers up his harmonica as the sisters' vessel and promises to be the "messenger" to pass the harmonica along.

Years later in 1933 in early Nazi Germany, twelve-year-old Friedrich that comes by a special harmonica while working in the local harmonica factory, is targeted by Germany's new eugenics laws which threaten to sterilize him due to a very obvious facial birthmark. His father of course protests the new direction Germany is moving towards, including the laws that affect their Jewish friends and neighbours. When his father arouses suspicion and is placed in Dachau, Friedrich and his uncle must come up with a plan to rescue his father and escape to Switzerland.

In the next segment in 1935 in the USA,  eleven-year-old Mike and his seven-year-old brother Frankie are orphans living in a children's home in Pennsylvania. When Mike finds out he will soon be outsourced to work the nearby farms and his little brother will go to an institution even worse than their current orphanage, he tries to come up with a plan to make sure at least Frankie will have a home. When the two brothers are requested based on their innate musical talent by the representative of a wealthy woman who must adopt in order to access her inheritance, it seems the boys have it made until Mike discovers that she only needs to adopt one child.

In the final segment in 1942 in California, ten-year-old Ivy Lopez is yanked from the first stable home she's had and moves with her family to Orange County where her father will be the caretaker of a farm owned by a Japanese American family now being interned in a camp in Arizona. Ivy's father's job depends on being able to keep the place afloat and impressing the owner's son, who will come to inspect it on his military leave. At the same time, Ivy finds out her new school is actually segregated, where children of Mexican descent go to a separate, decrepit building and are forced to learn pre-school material no matter their citizenship status or how well they speak English. Thankfully for Ivy, that doesn't prevent her from trying out for the school band with her harmonica.

This book is amazingly written and is intimidating at first due to its size, but is actually quite manageable. All the stories meld together as the book progresses, and you see how each child comes to own the same harmonica Otto had in the beginning (though it takes a while to see how Otto came to part with it). Each segment is wonderful even in isolation due to the historical fiction content, each tackles a piece of history you don't often see in children's books: the care of orphans and child labour in the early 20th century, groups other than Jews targeted by the Nazis in the war, and the Japanese-American internment and the racist treatment of other immigrant groups.

The music in the book is simply beautiful. The passages where the children play the harmonica, or the piano, or conduct, are written with such beauty and passion that it almost feels like a daydream. Plus, in the preface to each segment, there's a sheet of harmonica music to the key song that appears in that particular section.

Recommendation:
Simply beautiful and powerful. A must-read for music lovers or readers that enjoy historical fiction. It is a big read and will not appeal to all kids, but for those that give it a shot it will be well worth the effort.

Thoughts on the cover:
Simple but effective. I like the colour scheme and how all three kids are together at the bottom.
Posted by Andrea at 9:48 PM