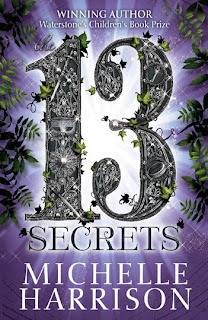 Summary:
From the back of the book:
Red is now living at Elvesden Manor under her real name, Rowan, and trying to put the past behind her. But staying on the straight and narrow isn't as easy as she had hoped. Hounded by those who would like her to participate once more in the changeling trade, Rowan is also haunted by dreams of the Hedgewitch's cottage and the chained-up Eldritch, who swore revenge when she left him there. Her past is about to catch up with her - but can she, Tanya, and Fabian prevent it consuming her altogether?

Review:
After reading The Thirtten Treasures and The Thirteen Curses, I knew this was one series that was pure gold in a sea of mediocre children's fantasy novels. The final book, The Thirteen Secrets, is no different, it's probably the best book out of the three.

Picking up several months after the events of The Thirteen Curses (book 2), you begin by exploring what Red/Rowan, Tanya and Fabian are up to at the beginning of summer vacation. Soon Rowan is caught up in her old changeling trade contracts, including Sparrow (I love that character), and the whole trio becomes involved in the usual fairy business, except this time everything is even darker than before (I'm talking character deaths here). I'm not going to say much more for fear of spoilers, but the book starts off slow similarly to The Thirteen Treasures and picks up considerably after about 200 pages. The ensuing plot's varying degrees of awesomeness more than makes up for the slow start.

This is a children's fantasy series that is delightfully dark and mature, yet still appropriate for middle-grade readers and teens, with amazing well-developed characters (both human and supernatural). Plus the author's writing style is pretty good too, I'll be on the lookout for the next thing she writes, hopefully it's as good as this series.

Recommendation:
A million times yes, read all three of the books in this series, order them from the UK (books 2 and 3 aren't available in the US/Canada yet), it's so worth the effort of importing them!

Thoughts on the cover:
My favourite of the three. The '13' is done to look like iron/metal with crystals in it, with a mostly purple and grey colour scheme with a shot of green. My copy was sparkly/shimmery too, not sure if this was just for this third book or if the other two received this treatment for first edition copies (my copies of the first two books were later printings).
Posted by Andrea at 6:26 PM