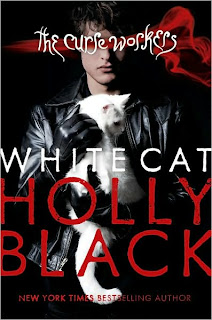 Summary:
From the inside cover:
Cassel comes from a family of curse workers — people who have the power to change your emotions, your memories, your luck, by the slightest touch of their hands. And since curse work is illegal, they're all mobsters, or con artists. Except for Cassel. He hasn't got the magic touch, so he's an outsider, the straight kid in a crooked family. You just have to ignore one small detail — he killed his best friend, Lila, three years ago.

Ever since, Cassel has carefully built up a façade of normalcy, blending into the crowd. But his façade starts crumbling when he starts sleepwalking, propelled into the night by terrifying dreams about a white cat that wants to tell him something. He's noticing other disturbing things, too, including the strange behavior of his two brothers. They are keeping secrets from him, caught up in a mysterious plot. As Cassel begins to suspect he's part of a huge con game, he also wonders what really happened to Lila. Could she still be alive? To find that out, Cassel will have to out-con the conmen.

Holly Black has created a gripping tale of mobsters and dark magic where a single touch can bring love — or death — and your dreams might be more real than your memories.

Review:
I'll warn you, I might be a little biased here because I'm not a big fan of Holly Black's writing style, but I wanted to give White Cat a read because I thought the premise sounded amazing.

Cassel lives in a world where people called 'workers' can cast spells and curses by touching someone; they can make you fall in love with someone and surrender all your money, beat up another person, erase and manipulate memories, and even kill. As a result, workers are looked upon as criminals (curses are illegal), forming mobster-like crime families to survive. People wear gloves to protect themselves from a worker's touch, to the point where bare hands are almost obscene. Cassel's whole family of workers serves one of the big crime families, with his brothers deeply involved in illegal activities. Cassel isn't a worker, so he struggles with his status as an outcast and tries to fit into normal society. Plus there's the whole killing his friend thing that hangs over him, poor boy's got a complex. When Cassel notices his brothers' weird behaviours, he decides to investigate what he remembers about his past and uncovers some startling secrets.

This book really didn't do it for me, mainly because I honestly didn't care about Cassel. Sure, I liked the kid, but I didn't get the feeling like he was completely broken over Lila's death and his involvement, and didn't feel he was completely hard done by. I think if Cassel had be portrayed in a more sympathetic manner I'd have cared more. The other thing was that although I loved the world setup, there wasn't a lot of explanation given to how everything worked right away....I was kind of confused for the first few chapters. You do get the information in bits and pieces later on, but I personally would've liked it up front. The plot kept me interested, but it never really made me emotionally involved with the characters, so I only kept reading to see if my predications about the plot were right (they were).

Recommendation:
It has a good plot with an excellent premise, but flat characters failed to make this a complete package for me. Fans of Holly Black will likely think differently, but that's just my opinion.

Thoughts on the cover:
I like how Cassel's eyes are obscured...that's pretty much it. The cover for the sequel, Red Glove, is a little more impressive.
Posted by Andrea at 11:55 AM