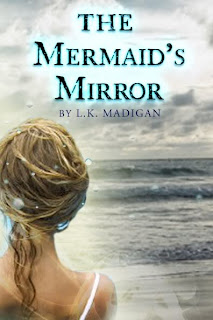 Summary:
From the inside cover:
Lena has lived her whole life near the beach — walking for miles up and down the shore and breathing the salty air, swimming in the cold water, and watching the surfers rule the waves — the problem is, she’s spent her whole life just watching.
As her sixteenth birthday approaches, Lena vows she will no longer watch from the sand: she will learn to surf.

But her father — a former surfer himself — refuses to allow her to take lessons. After his near drowning years ago, he can’t bear to let Lena take up the risky sport.

Yet something keeps drawing Lena to the water . . . an ancient, powerful magic. And one morning Lena catches sight of this magic: a beautiful woman — with a silvery tail.

Now nothing can stop Lena from seeking the mermaid, not even the dangerous waves at Magic Crescent Cove.

And soon . . . what she sees in the mermaid’s mirror will change her life forever.

Review:
Selena (Lena) longs for the sea that her family lives by, but her father won't let her learn to surf despite once being an avid surfer himself. Combined with discoveries Lena makes about her birthmother, it becomes obvious exactly why Lena's dad avoids the ocean.

The Mermaid's Mirror is similar to the selkie legends of Ireland/Scotland/Wales, if you're familiar with them. There are variations in different cultures too, Japan has a version where the creature is called a Tennyo, and doesn't hail from the sea, but from heaven. If you know these types of stories, it's obvious early on what the plot is and the circumstances behind Lena's mother's death/disappearance.

The early part of the book where Lena is uncovering this family secret and learning to surf is a little on the boring side, mainly because I have no interest in surfing and knew what the secret was, so I just wanted to get to the aftermath. Luckily for me, the aftermath of the secret and what happens to Lena is what makes this book wonderful. Even though the selkie legend forms a base for this story, the author went beyond to explore what would happen afterwards. The mermaid world she creates is wonderfully imaginative and different from typical mermaid myths/legends that we might already be familiar with. The ending felt bittersweet for me, it's what I felt Lena needed but was sad about it nonetheless. Sadly, the author was intending to write a sequel to The Mermaid's Mirror but has since passed away, so we'll never really know what might have happened after the ending.

Recommendation:
Wonderful story with a basis in existing legend that's a little slow to start, but the second half is worth the wait.

Thoughts on the cover:
Eh, it's not bad. It works for the story, but there's so much that could've been done with this cover to make it look amazing (like an underwater scene with a person that may or may not be a mermaid).
Posted by Andrea at 1:29 PM