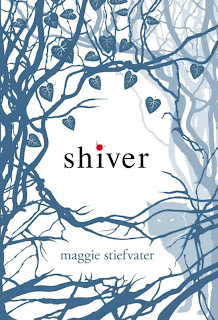 Summary:
From the author's website:
For years, Grace has watched the wolves in the woods behind her house. One yellow-eyed wolf—her wolf—is a chilling presence she can't seem to live without. Meanwhile, Sam has lived two lives: In winter, the frozen woods, the protection of the pack, and the silent company of a fearless girl. In summer, a few precious months of being human... until the cold makes him shift back again.

Now, Grace meets a yellow-eyed boy whose familiarity takes her breath away. It's her wolf. It has to be. But as winter nears, Sam must fight to stay human—or risk losing himself, and Grace, forever.

Review:
This is one of those books that I avoided reading up to now because it was another supernatural book, werewolves specifically. I'm glad I took the plunge and read it though, this is actually a really well-written story with an intriguing plot. In Mercy Falls, Minnesota, Grace watches the wolves in the woods outside her backyard. One wolf is her wolf, the one with the yellow eyes, the one that saved her from an attack by the other wolves when she was 10. After a local boy is attacked, hunters go after the wolves and Grace's wolf is shot. She finds him injured in her backyard and watches him transform from a wolf to a human with the same yellow eyes. She and Sam instantly connect and she finds out that all the wolves in the woods behind her house were once human. The cold changes them into a wolf and the heat makes them human, but they only have a limited number of years of changing back and forth until they stay a wolf forever. Grace and Sam work together to keep Sam human, to keep Sam Sam.

This book genuinely surprised me. The werewolf plot is executed differently: the idea that temperature makes them change and that they have a finite time of changing before they stay a wolf. The unique take on werewolves alone made me like this book, but the thing that really stands out is Sam. As a character, Grace is nothing really special; but Sam, who is struggling with who he is (human, wolf, or something else), expresses this angst in really poetic ways. He writes songs for Grace, he reads German poetry, he's a literary man-wolf, and he is appealing that way. Sometimes the writing is corny, but most of the time it comes across very nicely. The romance between Grace and Sam is just too darn cute, it's not overly sappy but has the urgency of a "young-love-but-surely-meant-to-be-due-to-cosmic-circumstances" kinda way. One good thing is that the book ends in a way that it could remain a one-shot even though it continues into a series. The second book in the series, Linger, is out this month, so I'll be picking that up to see where the story goes.

Recommendation:
If you're looking for a unique, well-written take on the usual supernatural romances, read this!

Thoughts on the cover:
Love it times infinity. There's something about this particular shade of metallic blue that I love, and the way the vines are arranged and overlap is very attention-grabbing. I also like how you don't immediately notice the wolf in the bottom-right corner at first glance.
Posted by Andrea at 8:58 PM