By The Time You Read This, I'll Be Dead - Julie Anne Peters 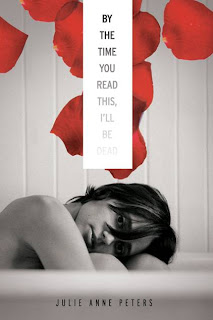 Summary:
From the inside cover:
Daelyn Rice is broken beyond repair, and after a string of botched suicide attempts, she's determined to get her death right. She starts visiting a website for "completers"- www.through-the-light.com.

While she's on the site, Daelyn blogs about her life, uncovering a history of bullying that goes back to kindergarten. When she's not on the Web, Daelyn's at her private school, where she's known as the freak who doesn't talk.

Then, a boy named Santana begins to sit with her after school while she's waiting to for her parents to pick her up. Even though she's made it clear that she wants to be left alone, Santana won't give up. And it's too late for Daelyn to be letting people into her life. Isn't it?

Review:
Like Wintergirls, After, If I Stay, Twisted, and Thirteen Reasons Why, this is one of those books that deals with extremely difficult subject matter; and because of that, it must be read. Daelyn is 15 and bullied to the point where she wants to end her life. She's been contemplating suicide since age 10 and has attempted it numerous times. Her most recent attempt has left her unable to speak, on 24 hour suicide watch, and unable to eat solids. She's decided to make a final attempt, and finds a new website and forum to do research and vent her memories. A boy named Santana shows up at Daelyn's school and genuinely tries to be friends with her, but Daelyn is so mistrusting she ends up ignoring him most of the time, not allowing herself to open up because she honestly thinks everyone is going to be cruel to her. Daelyn's got 23 days until her Day of Determination, the day she will decide whether she wants to go through with it or not. As she counts down the days, she reveals her history of bullying (and sexual assault), some of the recounts were so cruel I almost had to stop reading.

Daelyn reminded me so much of myself at the age of thirteen it was almost eerie (except for the repeated suicide attempts, I wasn't quite that bad). When I was in grade 8, I was at the point where I actually stopped speaking to my classmates because I felt that if I didn't acknowledge them, they wouldn't speak to me, and in turn wouldn't say things to hurt me. Hey, I was thirteen, all teenagers have super-twisted logic. I didn't even begin to open up to new people until grade 9 or 10, mainly because I experienced some of the same kind of bullying as Daelyn and didn't trust other people as far as I could throw them. I loved Daelyn because she reminded me so much of a younger me, but at the same time I wanted to slap her and tell her that there were people that cared about her and to just wait out the hell that is school for some kids until she could find more of those people. You can tell by her attitude that she honestly does want to be happy, but has just given up hope.

This book, like the others I listed above, is so honest and real...and that'll scare people. Some people don't want their teenagers reading books like these because they say it gives them ideas, but I think literature on these types of subjects are just what some kids need, I wish this book was around when I was 12. Granted, there is a lot of disturbing content, Daelyn reads posts on the website she visits that gives explicit details on the different ways to off oneself, but I'm sure it's nothing kids couldn't find on the internet anyway. I loved how the author made the point that the adults involved put the blame on Daelyn for some of the incidents rather than taking it out on the kids at fault, because that happens too, sad and messed up at it may seem. This book is beautiful and terrifying at the same time, but it's one of those books that needs to be read, especially by kids in the middle-school grades where bullying tends to intensify. The book denounces typical anti-bullying measures like peer mediation and zero-tolerance policies, it proves that there's no easy answer to a problem like this. There's also a guide at the back of the book that discusses the warning signs for bullying, suicide etc., and a list of discussion questions as well.

Recommendation:
Read it, whether you were bullied or not, whether you have kids or not (but especially if you have kids). Be warned that there is a lot of graphic information on how to kill yourself, so if you think anyone reading this might be on the verge of hurting themselves, please use the book as a teachable moment and discuss that, yes, Daelyn is hurting, but that there are people like Santana that are nice, and those are the people that make your life worth living. If you have a kid that is a bully, use this book to teach them empathy, that their actions have an effect on others, and that they should be kind and civil towards other people whether they're your friend or not.

Thoughts on the cover:
I like the rose petals and the bathtub (since that's the method Daelyn wants to use), and Daelyn's pose on the cover is vulnerable yet pensive. Not the best cover they could use, but it does the job.
Posted by Andrea at 7:10 PM