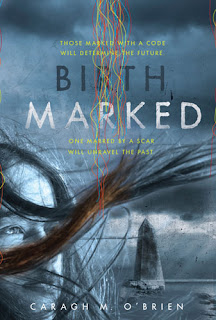 Summary:
From the author's website:
After climate change, on the north shore of Unlake Superior, a dystopian world is divided between those who live inside the wall, and those, like sixteen-year-old midwife Gaia Stone, who live outside. It’s Gaia’s job to “advance” a quota of infants from poverty into the walled Enclave, until the night one agonized mother objects, and Gaia’s parents disappear.
As Gaia’s efforts to save her parents take her within the wall, she faces the brutal injustice of the Enclave and discovers she alone holds the key to a secret code, a code of “birthmarked” babies and genetic merit.
Fraught with difficult moral choices and rich with intricate layers of codes, BIRTHMARKED explores a colorful, cruel, eerily familiar world where a criminal is defined by her genes, and one girl can make all the difference.

Review:
Spoilers abound, so tread carefully...
This book has been on my radar since January, mostly because the plot about babies and eugenics is one that I haven't seen yet in a dystopian novel (at least a YA dystopian novel). The only beef I had with this novel was that there were a lot of unanswered questions and plot threads that didn't get resolved by the end of the book, but then I found out this is the first book of a planned trilogy, so with that in mind I have no complaints. Now on to the good stuff. Gaia was trained as a midwife alongside her mother in Wharfton, the town outside the wall, where its citizens must surrender the first 3 babies born each month to the Enclave. After Gaia's first delivery by herself, she returns home to find her parents arrested and a guard that tells her to cooperate with the Enclave when they eventually question her. They are looking for a record of births that Gaia's mother supposedly kept, and it isn't until later on that Gaia realizes why they need it. Apparently the families that settled the Enclave lived inside the wall and made everyone else live outside it. After a lot of inbreeding, the Enclave's children are dying off from hemophilia, and their scientists have discovered that some of the children adopted from outside the wall (the 3 babies a month Gaia and her mother deliver) carry a gene resistant to hemophilia. Thus, the authorities of the Enclave want to track down the real parents of these babies and essentially make them do nothing but keep reproducing and take their babies to be adopted by parents in the Enclave. Gaia is conflicted by this because although the babies taken to live in the Enclave are rescued from the poverty of Wharfton, their real parents are heart-wrenched to give up their babies. That and the whole issue of reproductive slavery is just wrong. The book poses a lot of thought-provoking questions, especially relating to eugenics and reproduction.

The novel is nicely written, and it drew me right in to the point where I couldn't stop reading because I had to find out how things ended. The romantic element was handled well, and I hope the author revisits Gaia trying to track down her older brothers that were adopted into the Enclave because it wasn't touched on that much. Again, things were left open-ended at the end, but there's two more books to resolve everything, so that pacifies me. I'll definitely be picking up the subsequent installments, the story has me hooked.

Recommendation:
If you're interested in dystopian fiction with a unique storyline, read this!

Thoughts on the cover:
I like it. The blue and gray colour scheme is nice, and the little coloured ribbons at the top resemble a strand of DNA, so it all works well into the story. I also like how you can't see Gaia's left side of her face where her scar is, whereas one of the previous covers kind of ruined the mystery by showing what her scar looked like.
Posted by Andrea at 3:09 PM