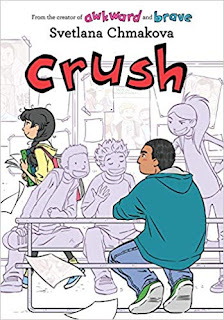 Jorge seems to have it all together. He's big enough that nobody really messes with him, but he's also a genuinely sweet guy with a solid, reliable group of friends. The only time he ever really feels off his game is when he crosses paths with a certain girl... But when the group dynamic among the boys starts to shift, will Jorge be able to balance what his friends expect of him with what he actually wants?

Review:
This is the third instalment of a graphic novel series that I absolutely adore. Copies of these should be in every middle-grade classroom, they're very topical and address issues (sometimes difficult ones) that all preteens and young teenagers deal with at some point in their lives.

After falling in love with Awkward, and enjoying Brave just as much (if not a little more), I hoped Crush would be the same. Thankfully, the author is simply amazing and delivers yet another new story that is just as impressive as the previous two.

This third book focuses on thirteen-year-old Jorge Ruiz, first introduced in Brave. Jorge, at first glance, seems like your stereotypical jock: he's big, plays baseball, and a lot of kids are a little afraid of him. But as Jensen first realizes in Brave, Jorge is actually a nice, no-nonsense guy with a moral code who looks out for people at school.

In Crush, Jorge begins the story with a solid group of friends that are very similar to him. When his friend Garrett begins mingling with a group of kids that behave in ways Jorge detests, he has to decide whether he is going to stay true to his own moral code or emulate what the other group is doing. Amidst all of this, the athletics club that Jorge is a part of is organizing a fundraiser ball, and Jorge himself develops a crush on fellow classmate Jazmine. So Jorge not only has to balance school, homework, baseball practice, and all the activities he has to help out with for the ball; he also has to juggle relationship drama on top of all that.

I really enjoy how the author manages to showcase both male and female characters throughout this series to create stories that appeal equally to boys and girls. Though one character does tend to be the main focus in each story, readers are introduced to several other students as secondary characters throughout each book that they will be able to see themselves reflected in at least a couple. The fact that this book focuses on friendship and budding romantic relationships but is from a male point of view is amazing in my opinion, just because it's rare to see a middle-grade story about those themes that doesn't come from a female main character.

I also like how the author focuses on the interactions of new clubs with each story, this time looking at the athletics club and the drama club. This subtly shows young readers that they can indeed be friends with all kinds of kids, and that they aren't limited to hanging out with those who share every single interest with them.

I really appreciate that the author included the issue of consent in this story. Characters of both sexes actually ask permission if they can kiss each other, and characters in turn give clear answers. This is really a wonderful example to set for the younger generation, it's presented as the default way to be respectful.

I also appreciate how, through Jorge, the author relates the idea that the people you choose to hang out with influence how you are perceived by others. Jorge dislikes James and his buddies because they're disrespectful jerks to everyone else, and loses a degree of respect for his friend Garrett when he starts hanging out with them.

This instalment, like the other two, showcases diversity across gender, race, cultural background, religion, body type, etc. I'm amazed at the different ways readers will see themselves reflected throughout this series. 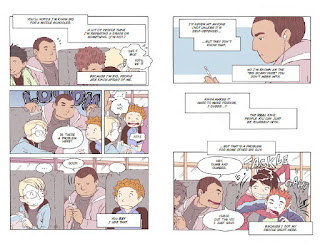 Recommendation:
I can't recommend this series enough. If you've got a preteen/teenager at home that you need to buy books for or teach that age level, just go out and buy these, you won't be disappointed.

Thoughts on the cover:
I like the continuity from the first and second covers. Jorge and Jazmine are in full colour while Jorge's friends are in lighter monochrome, and the subtle blush marks on Jorge's cheeks are just too stinking cute.
Posted by Andrea at 9:47 PM