Beast: A Tale of Love and Revenge - Lisa Jensen 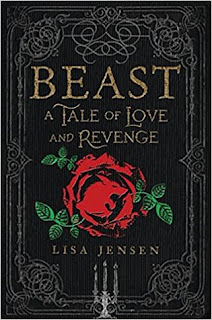 They say Chateau Beaumont is cursed. Servant girl Lucie can't believe such foolishness about handsome Jean-Loup, Chevalier de Beaumont, master of the estate. But when the chevalier's cruelty is revealed, Lucie vows to see him suffer. A wisewoman grants her wish and transforms Jean-Loup into terrifying Beast, reflecting the monster he is inside.

But Beast proves to be nothing like the chevalier. Jean-Loup would never tend his roses so patiently or attempt poetry - nor express remorse for the wrong done to Lucie. Gradually, Lucie realizes that Beast is an entirely different creature, with a heart more human than Jean-Loup's ever was. Lucie dares to hope that noble Beast has permanently replaced cruel Jean-Loup - until an innocent beauty arrives at the chateau with the power to break the spell.

Filled with gorgeous writing, magic, and fierce emotion, Beast will challenge all you think you know about good and evil, beauty and beastliness.

Review:
It seems I'm back on the fairy tale retelling kick again, this time with one of my favourites that I of course had to examine when I saw the news of its release.

This particular version has a unique aspect to it: the story is told from the perspective of a servant girl, and just as much of the plot takes place before and after the curse as during it. Lucie's narrative adds an interesting element to the story because we see a victim of the chevalier's cruelty early on, which makes it all the more surprising when she later becomes Beast's greatest supporter. There's a bit of a plot twist that explains why this occurs, but I won't reveal it for fear of spoilers. It makes sense given the context of the story (and the whole suspension-of-disbelief that one needs to possess while reading fairy tales), but I can see why it might rub some readers the wrong way, especially considering the nature of the chevalier's crime against Lucie.

The book does drag a bit during the middle when Lucie, who has been turned into a candlestick, simply sits in a cupboard waiting to be taken out. This happens later on as well when Rose arrives and Lucie is carried around by her constantly, but nothing much really happens. This is perhaps the downside of a first-person narration when your narrator becomes an enchanted object midway through the book.

Recommendation:
Worth the read for the unique take on the story (and I completely sympathize with the author's thoughts in her note at the end of the book), but there are better retellings out there.

Thoughts on the cover:
Aside from the massive font of the cliché title that made me hide the cover while at work for fear that my coworkers would think I was reading a trashy romance novel, the cover's not bad. The rose that hides a wolf's face is a nice touch, as is the candlestick at the bottom.