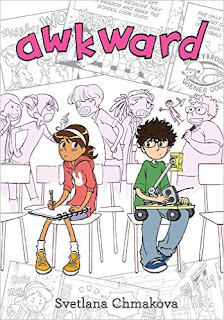 Cardinal Rule #1 for Surviving School: Don't get noticed by the mean kids.

Cardinal Rule #2 for Surviving School: Seek out groups with similar interests and join them.

On her first day at her new school, Penelope - Peppi - Torres reminds herself of these basics. But when she trips into a quiet boy in the hall, Jaime Thompson, she's already broken the first rule, and the mean kids start calling her the "herder girlfriend." How does she handle this crisis? By shoving poor Jaime and running away!

Falling back on rule two and surrounding herself with new friends in the art club, Peppi still can't help feeling ashamed about the way she treated Jaime. Things are already awkward enough between the two, but to make matters worse, he's a member of her own club's archrivals - the science club! And when the two clubs go to war, Peppi realizes that sometimes you have to break the rules to survive middle school!

Review:
I haven't thoroughly enjoyed a graphic novel like this in a long time, I'm completely enamoured with this book. I've read other works by this artist and I love them all, so I'm not surprised I love this one too.

Penelope has moved to a new town and is starting at a new middle school. Right on her first day she trips and spills her books across the floor, which is embarrassing enough, but when quiet Jaime helps her out, the other kids immediately start teasing both of them. Penelope reacts by shoving Jaime and telling him to leave her alone, and she regrets it for weeks afterward, wanting desperately to apologize but feeling too awkward about the whole encounter to actually approach him. In the meantime, the art club that Peppi has joined is clashing with the science club across the hall that Jaime is a part of. The art club has failed to contribute to the school community and has lost their table at the club fair, and a prank gone wrong by the science club has also lost them their table. When a competition between the two clubs to obtain a table goes horribly awry, Peppi and Jaime brainstorm to come up with a way to end the animosity between the groups.

First off, this graphic novel is adorable. The art work is a cute, anime-style with a soft colour palette, so it's very eye-pleasing. The characters are realistic for middle-schoolers, the creator captured the awkward adolescent mood perfectly in my opinion. Also, I love the diversity displayed here: equal numbers of male and female characters, Peppi is biracial, and there are characters of many different races and ethnicities, including a girl in a hijab, which I don't think I've ever seen in a children's graphic novel. We also have different abilities represented too, since Jaime's mom is in a wheelchair. In addition, both Peppi and Jaime are really good role models. They mess up like all kids do, but rectify the situation eventually while preserving relationships amongst them and being an example for the other kids. There's this scene at the end where the bullies that made fun of Peppi and Jaime at the beginning are doing it again but this time both sets of kids from the art and science club stand up for the two of them, and it was just beautiful.

Recommendation:
All classrooms need this book for their students since kids will be all over this like they flock to the Amulet, Bone, and Raina Telgemeier graphic novels.

Thoughts on the cover:
So. Stinking. Cute. I love how the author/artist captured the essence of the story between Peppi and Jaime in the foreground and the art and science clubs in the background.
Posted by Andrea at 11:27 AM