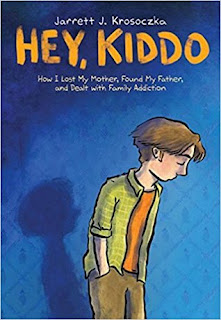 In preschool, Jarrett Krosoczka's teacher asked him to draw his family with a mommy and a daddy. But Jarrett's family was much, much more complicated than that. His mom was an addict, in and out of rehab and in and out of Jarrett's life. His father was a mystery - Jarrett didn't know where to find him, or even what his name was. Jarrett was living with his grandparents - two very brash, very loving, very opinionated people who had thought they were through with raising children...until Jarrett came along.

Now Jarrett's a teenager. He's gone through his childhood trying to make his non-normal life as normal as possible, finding a way to express himself through art despite the fact that he's grown up in a house where many things remain unsaid. It's only when he's old enough to to have his driver's license that Jarrett can begin to piece together the truth of his family - reckoning with his mother, tracking down his father, and finding his own identity.

Hey, Kiddo is a profoundly important memoir about growing up in a family as it grapples with addiction, finding the people who help you get through, and the art that helps you survive.

Review:
When I read the write-up for this months ago, I knew I had to read it. This is one of those really touching stories about a kid overcoming some immensely adverse circumstances, and the fact that this is a memoir just makes it all the more remarkable.

The author does a wonderful job of conveying exactly how his mother's addiction affected him growing up. Though he admits as an adult he came to understand her limitations and that she did in fact love him, it doesn't necessarily lessen the impact of that trauma during his formative years. I also appreciate how he mentions in the afterword that therapy helped him tremendously as an adult and how it would have been beneficial during his youth, but therapy just wasn't as accepted or commonplace during the 80s and early 90s like it is now.

You can tell this piece was cathartic for the author to create, it has this sense of synthesizing this lived experience as an adult and trying to package it in a way that could help kids today that he wished he had as a child. The little details like the letters, photos, and drawings all help reinforce the reality of the experience (not to mention the fact that the author managed a ton of stuff from his childhood years).

Recommendation:
This memoir is truly heartfelt and can be a story of hope for so many who are in similar circumstances. This is a volume that should be in every high school library.

Thoughts on the cover:
The cover's much brighter in terms of colour than the artwork inside (the author has a nice note at the end explaining the reasons behind that), but the orange tones work well against the bright blue pineapple wallpaper behind Jarrett (there's a note about the symbolism of that as well).
Posted by Andrea at 9:20 AM