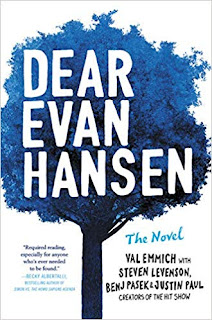 Dear Evan Hansen,
Today is going to be an amazing day, and here's why...

When a letter that was never meant to be seen draws high school senior Evan Hansen into a family's grief over the loss of their son, Evan is given the chance of a lifetime: to belong. He just has to pretend that the notoriously troubled Connor Murphy was his secret best friend.

Suddenly, Evan isn't invisible anymore - even to the girl of his dreams. And Connor Murphy's parents have taken him in like their own, desperate to know more about their enigmatic son from his "closest friend." As Evan gets pulled deeper into the family's swirl of anger, regret, and confusion, he knows that what he's doing can't be right, but if he's helping people. how wrong can it be?

No longer incapacitated by anxiety or hiding from the disappointment in his mother's eyes, this new Evan has a purpose. And confidence. Every day is amazing. Until everything is in danger of unraveling and he comes face-to-face with his greatest obstacle: himself.

A simple lie leads to complicated truths in this bighearted story of grief, authenticity, and the struggle to belong in an age of instant connectivity and profound isolation.

Review:
I've heard great things about the musical that this novel stems from, and not having seen it yet, I figured I may as well give the novel version a go and see if I like it. The fact that the original creators and screenwriters were a part of the novel's creation reassured me a bit as well that this would be as close to the spirit of the musical as you can get when adapting to print. Sadly, though this story has the potential to be really amazing and heartfelt (and some parts truly are), the novel's titular character just doesn't really make me that invested in him.

Evan is a severely anxious seventeen-year-old boy who is also depressed to the point of suicidal ideation. At the start of his senior year, his therapist gives him the assignment of writing letters to himself in order to try to keep a more positive outlook. After a confrontation and misunderstanding one afternoon, classmate Connor Murphy ends up with one of Evan's letters to himself. When Connor dies by suicide that night, Evan is eventually contacted by the Murphy family, asking why their loner son was writing letters to Evan. With the best of intentions to ease the suffering of a grieving family, Evan tells the Murphys that Conner and he were good friends and had been communicating in secret. With the later creation of The Connor Project, a movement to remember Connor and create awareness for mental health and suicide, Evan is thrust into the spotlight and his life as he knows it changes very quickly. However, as Evan's mother begins to enquire about the sudden changes in her son's behaviour, Evan's own guilt and anxiety over his actions begin to grow.

There are a few things about this text that I do truly enjoy. There are some lovely moments and sentiments expressed by characters about feeling isolated and disconnected from others, they allow for readers to really empathize with the characters. I also like how the effects of grief on a family are shown, especially when the person who dies has complicated relationships with the family involved. It's liberating for Zoe to say that although she misses her brother, she doesn't miss the tension in the house or the times where he would become violent towards her.

On to the parts of the novel that just didn't do it for me. Evan is a sympathetic character to a certain extent, but when his lie kept snowballing after he had multiple opportunities to correct it I really lost interest in what happened to him. There's something about lying to a grieving family in the manner that Evan did that just doesn't sit right with me. Also, the events in the conclusion just didn't seem all that realistic either, it's as if Evan gets off too easily.

Recommendation:
I'd say this is worth the read whether you've seen the musical version of this or not, but it may fall flat for some readers as it did for me.

Thoughts on the cover:
The image of the tree, particularly the shading, is really well done; and the symbolism fits nicely with its mention in the novel.
Posted by Andrea at 11:01 PM