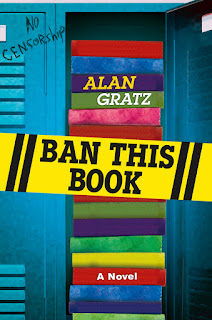 It's a battle of the books - and Amy Anne is determined to win!

It all started the say Amy Anne Ollinger tried to check out her favourite book in the whole world, From the Mixed-up Files of Mrs. Basil E. Frankweiler, from the school library. That's when Mrs. Jones, the librarian, told her the bad news: her favourite book was banned! All because a classmate's mom thought the book wasn't appropriate for kids to read.

Amy Anne decides to fight back by starting a secret banned-books library out of her locker. As word spreads, Amy Anne's locker stash quickly grows into a school-wide sensation. Soon, she and her friends find themselves on the front line of an unexpected battle over book banning, censorship, and who has the right to decide what kids can read.

Review:
I so needed this book as a kid. Like Amy Anne, I was the little bookworm who was quiet and didn't stand up for themselves. I definitely would've appreciated Any Anne's transformation to become a kid who speaks her mind and stands up for what she believes in.

Amy Anne is nine, and with two younger sisters at home (one of whom she shares a room with) she doesn't get a lot of quiet time to herself. So she stays in the library after school reading book after book. When she tries to check out her favourite yet again, the librarian tells her it's been removed due to a parent challenging the book's content, along with several others deemed inappropriate. Even after her parents buy her a copy of her own, Amy Anne decides that good books deserve to be read, and that only someone's parents can tell a kid what they can and cannot read. When she discovers that some of her friends own copies of the other banned books, the B.B.L.L. (Banned Books Locker Library) begins. After pooling their money to purchase more books, and even receiving donated copies from authors, the B.B.L.L. begins to grow even further. When the principal uncovers their little operation, leading to the librarian being fired, Amy Anne and her friends decide to step up their game and really show the trustees how ridiculous book banning can be.

As an English teacher and general book-lover, this book and the story it tells is so incredibly important. The story takes place in North Carolina in the US, where I know they do have more issues with banned books and censorship. I'm fortunate that I work in a school board in Canada that hasn't really had an issue with book banning and censorship in general, although a board near mine did temporarily ban Philip Pullmans's His Dark Materials a few years back which I was absolutely incensed over. I'm of the opinion that if a kid is old enough to read something let them have at it, but to be a parent and have a conversation about the content your kid is reading, same as with movies or tv shows or any media they consume. Are there some books I wouldn't let my kid read at this stage? Of course, but that doesn't mean I wouldn't let her read them ever, and that's my prerogative as her parent.

The list of banned books in this novel are real: they've all been banned at some point in time in the US over the past several decades, and the reasons are mind-numbingly stupid. Amy Anne and her friends make that point crystal clear when they intentionally look for things that would get a book banned: any behaviour considered negative like disobeying parents, violence, sexual content of any kind, having LGBT or transgender characters, and many others. I look at that list and see many books that were actually required class reading in elementary school for me: Bridge to Terebithia, Island of the Blue Dolphins, From the Mixed-up Files of Mrs. Basil E. Frankweiler, and Anne Frank: Diary of a Young Girl. Not only did these books not corrupt me as a child, they made me a better human being. I see books on that list that not only would I not mind if my child read them, I've already bought those exact copies in preparation for when she's a more proficient reader (she's not quite six yet, I figure give her another year to eighteen months and she'll be voraciously devouring everything on the shelves). So needless to say, the unrestricted right to read is one I will always defend.

I love Amy Anne's character development in this novel. She goes from a meek little mouse (as Trey's drawing depicts) with very closed-minded ideas about good books and the people that read them, to a kid who will speak her mind about what she feels is right, who realizes that different people like different things, and that even the parent that instigated the book banning is actually a good person who's just a bit misguided. I also like that Amy Anne is a person of colour (as are her family), we need more diversity in our kid's lit, not to mention on our book covers too.

The only thing I have issue with in this book is that there is no way a group of average nine year olds could've orchestrated the series of events as lined out in this book without parental influence of some kind (unless they were highly gifted, which the kids in question are not). Could kids of eleven or twelve do it? Sure, but not nine, no way. But aside from that suspension of disbelief, the book is awesome.

Recommendation:
All book lovers should read this, not to mention teachers, parents, hell let's make it everyone.

Thoughts on the cover:
Very basic. It gets the message across, but this is a book that would benefit from a good cover redesign.
Posted by Andrea at 12:12 PM