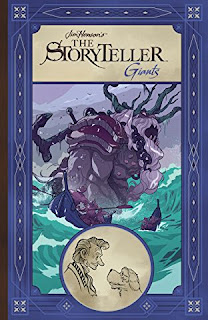 It's not the stories you tell, but how they are told.

The critically acclaimed Jim Henson's The Storyteller: Giants celebrates four mythic tales of when giants roamed the Earth, inspired by folklore from around the world and told in the spirit of Jim Henson's beloved television series.

Featuring an array of styles and stories by some of today's most original talent, including Conor Nolan (Neverboy), Brandon Dayton (Green Monk), and introducing Jared Cullum and Feifei Ruan, this stunning hardcover edition also includes an exclusive behind-the-scenes look at the process and care taken in adapting each of these timeless tales.

Review:
After reading the original release and finally getting my hands on the Dragons volume from last year, I was excited to read the Giants volume since this is honestly one of my favourite graphic novel installments; partly since they release new collections so intermittently but also because there's such variety in the stories presented.

The Giants volume features four stories centered around giants, but more often than not the real focus is on those whom the giants terrorize and how they reclaim their livelihood. I didn't like this volume quite as much as the Dragons collection, but I give this installment credit for the adorable art style of the third story, "Pru and the Formorian Giants." Also, the art of the final story, "The Fisherman and the Giant" is so incredibly gorgeous I think it's worth picking up just for that, I mean, look at it: 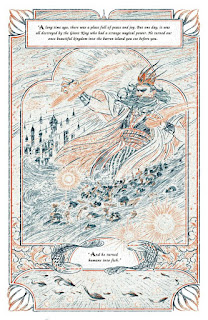 It's a story adapted from One Thousand and One Nights, so the artist used a Middle Eastern inspired art style; it's enchanting to look at.

Recommendation:
Again, if you like folktales and stories in general you'll want to pick up these volumes.

Thoughts on the cover:
I like the consistency from cover to cover in this series: the dragons volume was done in green tones, this one in blues and the witches volume in dark reds (which I still need to track down).
Posted by Andrea at 9:09 AM