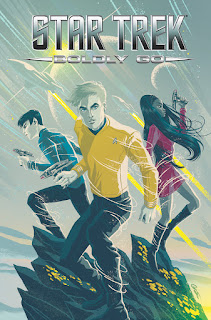 After the destruction of their ship in Star Trek Beyond, the crew of the U.S.S. Enterprise have been reassigned to new ships with unseasoned crews, and unfamiliar roles. The galaxy enjoys a fragile peace, but the discoveries of new worlds, new species, new ships, all lead to a new danger unlike anything the federation has encountered before. And resistance may be futile...

Review:
While waiting for the new Star Trek series to appear on my streaming service, I thought this might be an appropriate way to pass the time.

This version takes place shortly after the events of the third film, and follows the crew as they're split up in different environments but eventually reconnect in order to rescue a ship of people from being assimilated by the Borg. There's also one issue of the six included in this volume devoted to a vignette about Jaylah.

I enjoyed how the story forces the crew to come together again, I really do enjoy them all as a group. The story was decent, enough that you could read this solely on its own or continue to the subsequent volumes. The art style of the first five issues is consistent (not the same as the cover art though), but then changes in issue six (I preferred the former rather than the latter), so that's something to be aware of.

Recommendation:
Definitely worth a look if you're a fan of the new Star Trek universe and enjoyed the movies.

Thoughts on the cover:
I like the art style here, and several more of the artist's pieces are included throughout the book.
Posted by Andrea at 4:00 PM