The Girl From the Other Side: Siuil, A Run Vol. 1 - Nagabe 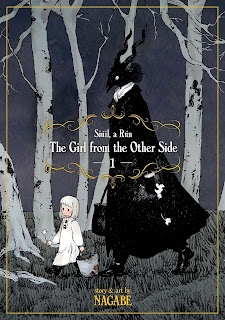 In a land far away, there were two kingdoms: the Outside, where twisted beasts roamed that could curse with a touch, and the Inside, where humans lived in safety and peace. The girl and the beast should never have met, but when they do, a quiet fairytale begins.

This is a story of two people - one human, one inhuman - who linger in the hazy twilight that separates night from day.

Review:
I saw this cover and immediately knew I wanted to read it. People have compared it to The Ancient Magus' Bride, and on the surface level that comparison fits (otherworldly male figure paired with vulnerable female figure), but a closer inspection reveals a different type of tale. The Girl From the Other Side (Totsukuni no Shoujo) is a fairy tale immersed in magical realism that is lighthearted and dark at the same time.

Shiva is a young girl under the care of a well-dressed demon (Outsider) she calls Teacher. She is under the impression that her aunt will come fetch her from the cottage in the woods where they live, but only Teacher is aware that Shiva was abandoned in order to spare her life. During their interactions Teacher cannot touch Shiva, otherwise she will turn into a demon herself. As Teacher and Shiva go about their days in a very adorable father-daughter fashion, he struggles with protecting Shiva both from the Outsiders and from the knowledge that her aunt will never come for her.

The story is shrouded in mystery and is slow to unravel, which is part of its charm. Shiva's childlike innocence is a perfect juxtaposition to the underlying darkness and shadow that pervades everything in the world they inhabit. The art is beautiful as well, it doesn't look like your typical manga style, more like the soft watercolours you'd find in a children's storybook. 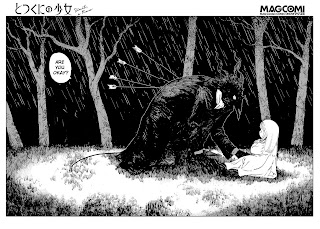 Recommendation:
The first volume ends on a cliffhanger, so I am definitely reading more of this. There are two volumes out currently in the English translation with a third coming out at the end of this month.

Thoughts on the cover:
Again, the cover is what attracted me to this title, it very much embodies the spirit of the work at least thus far.
Posted by Andrea at 9:33 PM