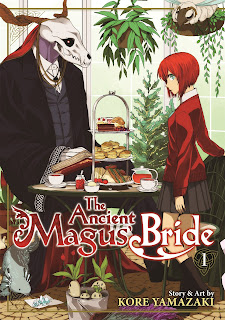 Her name is Chise Hatori, a penniless orphan troubled by visions. Sold as a slave to an inhuman mage, she is about to begin a strange new life, filled with magic, fairies, and other beings of a fantastical nature.

Review:
I first came across this as a recommendation from an internet friend, and I must admit, I was really intrigued by the skull-headed guy (whom I later found out was Elias, the mage of the title). I've since read most of the available manga volumes and am waiting with bated breath for the anime tv series set to premiere in October. This type of story and universe seems extremely weird at first glance (I'll even admit I didn't think I'd like it), but decided to give it a shot based on my friend's tastes and am I ever glad I did.

This story does a fantastic job of world-building: there is a smaller cast of main characters (both human and non) but a cavalcade of creatures that make the world that Chise and Elias inhabit vibrant. All the characters in my opinion are very endearing (there aren't any I can honestly say I dislike) and their relationships to each other are quite heartfelt. I appreciate how even though Elias literally buys Chise from a slave auction, that they do have a sweet, almost familial relationship and they do genuinely care for each other.

Recommendation:
If you're big into fantasy, give this a shot.

Thoughts on the cover:
Nicely posed and detailed, and as always I appreciate the colour since manga has very few colour pages on the inside.
Posted by Andrea at 8:45 PM