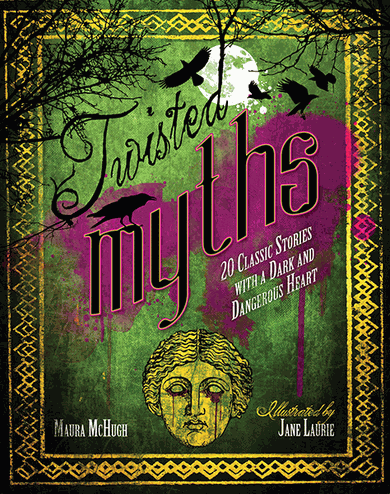 This book is not for the bedtime reader. Open it up to find the sinister myths and legends you were not told as a child. Maura McHugh's frightening retellings of these ancient tales bring the powerful gods and goddesses of past worlds to the modern reader. From the impossible trials imposed by their jealousy and vengeance to the trickery of desperate lovers, tragedy and triumph spill from these ancient myths and revisit the horrifying origins that shaped and scarred the mortal world.

If you are among those fearless readers who thrive on chilling tales, you won't want to put this book down until the very last page.

Review:
I'm always up for new mythology books, and this one looked intriguing.

I though that these would be re-imaginings of the myths, similar to the fairy tale retellings in novels that've been coming out where there are recognizable elements but the stories are completely different. However, the versions of these myths are ones I've seen before, so if you're a seasoned reader of mythology there won't be anything really new here.

The beauty in this book lies in the selection and variety of the stories and the illustrations. Most mythology books centre on a single cultural origin of the stories: Greek/Roman, Norse, Egyptian, etc. This book has a little bit of everything: Greek, Norse, Egyptian, Irish, Indian, African, Native American, Hawaiian, Japanese, Chinese, plus even more obscure ones from Central America. They were going for a dark and bloody theme here, which isn't hard to find in myths, but the illustrations here are simply beautiful. They're made with an amazing colour palette, so artistically minded readers might get enjoyment from those as well. The content and illustrations aren't overly gory, so in terms of an appropriate age level, I'd think this could work for readers as young as 10 or 11 and up.

Recommendation:
A great selection of popular and lesser known myths from many countries of origin, a wonderful book for readers just getting into mythology that like their material a little on the scary side.

Thoughts on the cover:
Considering how gorgeous the illustrations are, they could've picked a better image for the cover...the statue head crying tears of blood is a little over-dramatic and is drowned out by the huge title font anyway.
Posted by Andrea at 9:05 PM