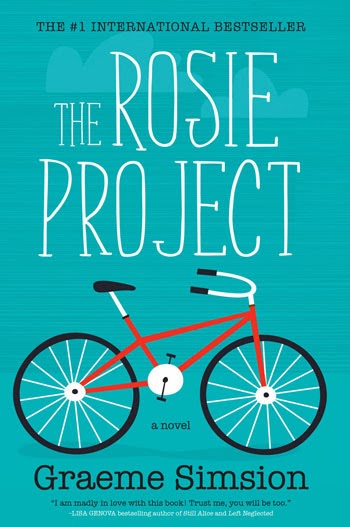 Must be punctual, logical, and enjoy travelling by bicycle. No smokers, drinkers, or horoscope readers need apply.

Don Tillman has a brilliant scientific mind, but social situations confound him. He's never had a second date. And so, in the evidence-based manner in which he approaches all things, he embarks upon the Wife Project: a sixteen-page questionnaire to find the perfect partner. Then in walks Rosie Jarman.

Rosie is on a quest of her own. She's looking for her biological father, a search that a certain genetics expert might just be able to help her with. Soon Don puts the Wife Project on the back burner in order to help Rosie pursue the Father Project. As an unlikely relationship blooms, Don is about to realize that, despite the best scientific efforts, you don't find love: love finds you.

Review:
This book had so much hype that I just had to give it a shot. Plus, the fact that the synopsis had a nerdy professor looking for love in all his awkwardness sealed it for me.

As seen from early on in the book when he gives his lecture on Asperger's, Don himself is an Aspy: extremely intelligent yet not quite all together on the social skills. For this reason he hasn't had much luck with romantic relationships (the fact that hugging repulses him might also have something to do with it). With the help of his adulterous friend Gene, Don creates a questionnaire to help weed out women according to his preferences: healthy BMI, no smoking or excessive drinking, and no vegans.

After a few hilarious encounters without success, Don meets Rosie, a PhD candidate moonlighting as a barmaid. Initially a set-up by Gene, Rosie asks Don to help her figure out who her biological father is, a question that's been plaguing Rosie since her mother died when she was a child. Rosie has lots of daddy issues which leads to issues with romantic commitment with men, so the relationship between her and Don seems unlikely, but when it starts to blossom boy is it ever cute (about as cute as a relationship between a 40-year-old academic and a 30-year-old cynic can be).

The ending is a little rushed with tying up the relationship loose ends plus finding out who Rosie's biological father is, but overall it's a really fun, humorous story.

Recommendation:
If the idea of a Sheldon Cooper from Big Bang type of character trying to find a wife sounds like your type of story, give The Rosie Project a try.

Thoughts on the cover:
Eh, it's okay, considering the the bicycle doesn't really have much to do with the plot. I thought having some test tubes or other science-y stuff would be more appropriate, but then it might make readers think this is a non-fiction book...
Posted by Andrea at 9:14 PM