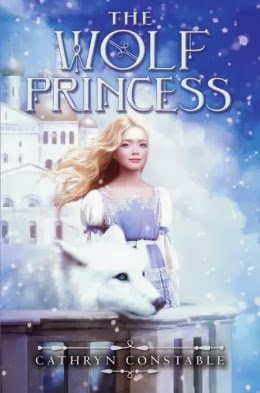 ...of sparkling snowflakes and silver birch forests and air so crisp and cold it brought a blush to her cheeks. But Sophie's days in London are filled with rain. Only the friendship of bookish Marianne and glamorous Delphine makes it better.

Then, as if by magic, the girls find themselves traveling deep into wintry Russia. Abruptly abandoned in a blinding blizzard, they fear for their lives. But just like in a diary tale, a princess comes to their rescue: the beautiful, imperious Anna Volkonskaya, who brings them to a winter palace that was magnificent - once upon a time.

At first, Sophie is enchanted by Princess Anna's tales of glittering gray diamonds and wild white wolves. But she soon grows concerned. What is her place in the sinister mystery that surrounds the palace? Even as the wind and wolves howl outside, is Sophie in more danger now than she ever was lost in the snow?

Review:
What originally drew me to this book was the cover...not the one shown above, I saw an alternative cover. Sophie is an orphan (I'm guessing around 12 or 13 years old, the author doesn't actually say) who lives at a private boarding school in present-day London. Aside from the absence of her parents and not knowing much about her background other than the Russian stories she vaguely remembers her father telling her, Sophie feels out of place at school and longs for a true wintery, magical place like Russia.

Through some convenient coincidences, Sophie and her friends Marianne and Delphine are asked to go on a student recruiting trip to St. Petersburg. Through some more unrealistic events, the girls are abandoned by their chaperone and find themselves invited by a princess to a palace in the countryside. Princess Anna Feodorovna Volkonskaya immediately attaches herself to Sophie, and the princess' assistant Ivan enthrals Sophie with tales of the Volkonskaya family, related to the czar in the days before the revolution and guarded by white wolves. As the story unfolds, Sophie's purpose is realized and everything comes together.

There were a few things the author got so incredibly right. The way she writes the Russian winter setting is truly magical and surreal, it feels like Sophie really is in a fairy tale rather than modern-day Russia. This is the kind of material I would use in a classroom to show students how to really immerse readers in your writing. The scene towards the end of the book with Sophie and the wolves was well done too. Unfortunately there were some issues throughout the book that hindered my enjoyment of what had the potential to be an amazing story.

From the beginning, there were issues relating to suspension of disbelief. I can almost believe that the girls get sent on the Russian trip even though the headmistress is against it, but the girls getting abandoned on the train and blindly following Ivan to the palace. A strange man comes up to you knowing your names and tells you a princess is expecting you...what, were you born yesterday?  Are the red flags and alarm bells not going off in your head? If that wasn't enough to send up the signals, the princess has several strange freak-outs (Sophie and Delphine switching sarafans, Sophie not signing the paper, Sophie seeing the wolf), any of which would make even a 12-year-old girl think, "hmm, this chick is nuts, I'm outta here."

Secondly, the story moves rather slowly until you're practically at the end when Grigor comes in, then everything concludes rather quickly. Also, this felt like it was supposed to be a time travel story, I thought Sophie and the girls had been transported back to pre-revolution Russia, or it was hinting that they had. Even when you find out they're still in modern-day Russia the whole plot point with the Volkonskaya diamonds seems really far-fetched. And then when Sophie discovers her parentage and actually gets to stay...and she's going to pay for the upkeep of a palace with what exactly?

Recommendation:
Beautiful setting and atmosphere, but not executed as well as it could have been. 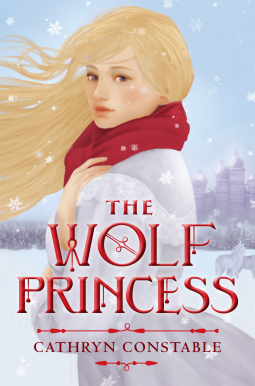 This was the cover image I originally saw, and I'm partial to it over the actual cover shown above. I do like the purple, blue, and silver tones the actual cover has, it makes the winter feel all the more enveloping. Plus the actual book text is purple, what's not to like?
Posted by Andrea at 9:11 PM