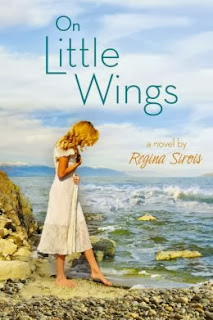 Jennifer is an only child, and so were her parents-at least that's what she thinks, until she finds an old photo in the back of one of her mother's books. The woman in the photo looks just like Jennifer, down to the smattering of freckles across her nose. And her mother refuses to talk about it.

Compelled to find answers, Jennifer embarks on a quest that takes her from the wheat fields of Nebraska to the fishing town of Smithport, Maine, home to the one person who can help her solve this family secret-the woman in the photo. But Jennifer learns that it takes the entire village of Smithport to piece together the story behind her mother's hidden past. She needs help from Nathan, the genius with the reluctant smile from across the cove; Little, the elderly town matriarch and former movie star; and The Jacks, three weathered fishermen who dabble in pyrotechnics. As Jennifer discovers the lost chapters of her mother's life, she unwittingly begins to write a few of her own.

Review:
First off, sorry this is the first review in 6 weeks; between an insanely busy period at work and Christmas, something had to give ^^;

On Little Wings is mainly a story about family secrets, issues, and relationships. Jennifer is a mature 16-year-old that has a wonderful relationship with her parents, until she finds a picture of a relative her mother claims she never had. When her mother refuses to talk about her newly discovered aunt Sarah, Jennifer decides to go to her mother's childhood home in Maine to meet her. After discovering the story behind why her mother vehemently refuses to speak of her sister, Jennifer hatches a plan to get her mother to travel to Maine. Along the way, Jennifer meets several interesting characters in Smithport and has quite the summer adventure. The events in this book manage to convince me all the more that if everyone had several years of therapy under their belt between the teenage and adult years we would run out of book plots since everyone would work out all their drama in therapy.

The book is well-written and one that will likely appeal to bibliophiles. I especially like how Sarah, Jennifer, and Nathan have their nightly tradition where they share a quote or lines of text that speaks to them; that's the stuff of my daydreams that I only wish would happen in my backyard.

Jennifer is an admirable character; she's mature and has a genuinely good relationship with both her parents. Even after discovering her mother's secret, she never resents or judges her mother, she just wants to know the truth. Little is an amazing old lady, she's spunky and ornery and I love that she is the driving force that sets everything in motion (hence the title relates to her). I'm not sure how to feel about Nathan, he's prickly and inconsistent and wasn't a great love interest, at least in my opinion.

Recommendation:
A great little read, especially if you're in the mood for a warm, summer beach setting in the midst of the below zero temperatures.

Thoughts on the cover:
Not your typical YA cover, but I like it.
Posted by Andrea at 8:46 PM