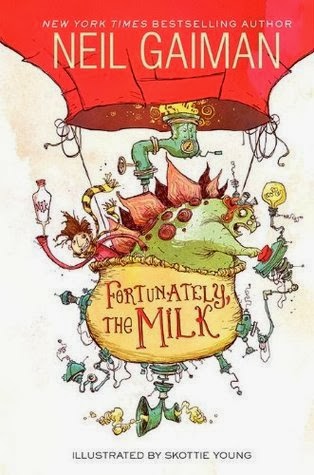 "I bought the milk," said my father. "I walked out of the corner shop, and heard a noise like this:

I looked up and saw a huge silver disc hovering in the air above Marshall Road."

"Hullo," I said to myself. "That's not something you see every day. And then something odd happened."


Find out just how odd things get in this hilarious story of time travel and breakfast cereal, expertly told by Newbery Medalist and bestselling author Neil Gaiman and illustrated by Skottie Young.

Review:
I have to give my husband credit for this one, he actually bought it rather than me; which is really something, because kid lit is not something my husband actively seeks out in his reading material. Neil Gaiman is an author I really enjoy, but his kid's books are a bit of a hit and a miss for me. I loved Coraline but wasn't nuts over The Graveyard Book, but thankfully Fortunately, The Milk is pretty awesome.

The story starts off with a mother going to a conference, leaving the father to care for his son and daughter. After leaving to go to the corner store when they run out of milk, the father takes an insanely long time to get back. When he does, the kids ask what took him so long. What follows is a story about time machines, a talking stegosaurus, vampires, pirates, tribespeople making sacrifices to a volcano, aliens, and of course the bottle of milk.

It's a short little story, but it's hilarious (I think this is a case where the humour might appeal more to adults than kids) and completely ridiculous. Plus, the book is full of illustrations (every page is illustrated) that are just awesome and are integral to the story.

Recommendation:
If you're in for a short, funny story, give this one a read.

Thoughts on the cover:
Cover art by the guy who illustrated the interior of the book, and I like his art, ergo the cover rocks.
Posted by Andrea at 6:59 PM