Gadget Girl: The Art of Being Invisible - Suzanne Kamata 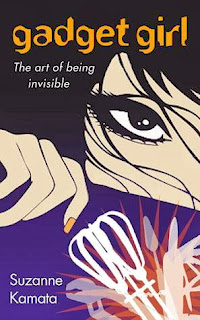 Aiko Cassidy is fifteen and lives with her sculptor mother in a small Midwestern town. For most of her young life, Aiko, who has cerebral palsy, has been her mother's muse. But now, she no longer wants to pose for the figures that have made her mother famous. Aiko works hard on her own dream, becoming a sought-after manga artist with a secret identity. When Aiko's mother invites her to Paris for a major exhibition of her work, Aiko resists. She'd much rather go to Japan, Manga Capital of the World, where she might be able to finally meet her father, the indigo farmer. When she gets to France, however, a hot waiter with a passion for manga and an interest in Aiko makes her wonder if being invisible is such a great thing after all.

Review:
I picked this up purely for the Japanese-inspired influences, but I'm so glad I did. Gadget Girl is a well-written coming of age story that's incredibly heart-felt and sweet.

Aiko is about to turn fifteen and wants nothing more than to be known for something else other than being the disabled daughter that inspired a series of famous statues. Looking nothing like her mother, Aiko longs for her absent Japanese father and embraces his culture: trying to grow indigo, learning Japanese,  and becoming an amateur manga artist (even though she intentionally publishes anonymously). When Aiko and her mother travel to France, they'll be forced to face their fears and insecurities and grow as people.

First off, Aiko is a wonderfully real character. In addition to the unique aspect of her cerebral palsy and the challenges that brings, Aiko is a regular teenager dealing with school, boys, popularity, an absent father figure, and trying to come into her own as a person. Her mother, though the typical flakey-artist type, is a loving parent who truly wants the best for her daughter and to celebrate who she is. Raoul, her mother's boyfriend, is a shining example of a step-father figure and is just a great person overall. Herve, the son of her mother's French friend, is the first stranger to really accept Aiko for who she is and sees beyond the limp and clawed left hand and arm. Every character was really enjoyable and I can't say there was anyone I didn't fall in love with.

I loved the addition of Aiko going on an almost pilgrimage to Lourdes in an attempt to cure her disabilities. At her lowest point, Aiko resents her mother's statues of her, hates herself for the condition that caused her father and his family to reject her existence as a baby, and believes no one could truly love her as she is. Though she isn't physically healed at Lourdes like she wants, Aiko comes away from the experience spiritually healed, accepting herself for who she is and letting go of the fear of those who think she is less because of her CP. This is symbolically represented by Aiko finally outing herself as the creator of her manga.

Recommendation:
A wonderful, sweet coming of age story that everyone should read (especially those who like stories with a Japanese flavour).

Thoughts on the cover:
Loved the manga-style cover, very appropriate considering the content.
Posted by Andrea at 8:01 PM