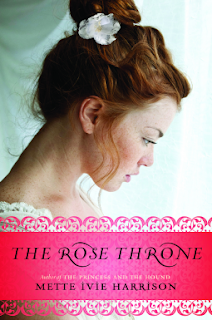 A throne of rose-coloured wood, intricately carved, its origins lost in time.

Each princess may in time rule over her own kingdom, but only one can rule over both.

Can either princess afford to follow her heart, while around them men struggle and vie for power? Can either rule if the other yet lives? And what of the prophecy, which tells of a land and magic united under a single monarch? Mette Ivie Harrison's new fantasy romance features two heroines, as different as night and day, caught up in a maelstrom of events, where love is the most dangerous of all emotions, and survival means concealing all that matter most.

Review:
The premise sounded really interesting so I picked this up. Though to be fair, the summary isn't really accurate once you read the story, so don't put too much stock into it.

The story is original and engaging. The people of the kingdoms of Rurik and Weirland possess an innate power called weyr. Taweyr is the male magic, which controls death and war. Neweyr is the female magic and controls life and the earth. Ailsbet is the 17-year-old princess of Rurik, where taweyr is valued above all else. Deemed to have no magic and worthless to her father, Ailsbet grows to be self-resilient and intelligent, and also a bit prickly. Marlissa (called Issa) is the 18-year-old princess of Weirland that is betrothed Ailsbet's 13-year-old brother Edik. Entering into the betrothal in order to help  bring the two kingdoms together through the prophecy with the idea that Edik will grow to be a better man than his father, Issa tries to forget her love for Duke Kellin and sacrifice for the good of her kingdom. When Ailsbet discovers she is Ekhono (when a person possesses the weyr of the opposite gender), she must keep it a secret to save her life, but is encouraged to work through her brother to become queen as the person with the stronger taweyr.

The concept of the weyrs could've been explained more, you never really get a concrete idea of exactly how they work or what they do. There was a lot of sexist issues in the book: who is deemed to have value, what jobs are seen as integral, and what happens when men are valued to the exclusion of women and their influence, so it was interesting to see the author delve into this territory, I quite enjoyed it. The characters are well-developed and endearing; Issa and Ailsbet are quite different but are strong females that are flawed in their own ways. Kellin, Umber, and Edik are multi-dimensional as well.

The only downside was the ending. Everything built up and up but fell flat all of a sudden, there just wasn't any satisfying resolution to any of the plot points. Thus far The Rose Throne is a one-shot with potential plans for sequels (possible trilogy?) and I really hope there are more instalments because the ending just didn't cut it.

Recommendation:
Excellent story, writing, plot, and characters. The ending falls short (pray for a sequel), but if you can overlook that it's well worth the read.

Thoughts on the cover:
I like it. Ailsbet is exactly as described, and the position of her face is not typical of most YA covers.