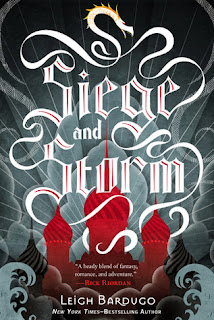 Hunted across the True Sea, haunted by the lives she took on the Fold, Alina must try to make a life with Mal in an unfamiliar land, all while keeping her identity as the Sun Summoner a secret. But she can't outrun her past or her destiny for long.

The Darkling has emerged from the Shadow Fold with a terrifying new power and a dangerous plan that will test the very boundaries of the natural world. With the help of a notorious privateer, Alina returns to the country she abandoned, determined to fight the forces gathering against Ravka. But as her power grows, Alina slips deeper into the Darkling's game of forbidden magic, and farther away from Mal. Somehow, she will have to choose between her country, her power, and the love she always thought would guide her-or risk losing everything to the oncoming storm.

Review:
After reading the first in the trilogy, Shadow and Bone, a couple months ago and getting hooked despite a few annoying things, I knew I'd be picking up the rest of the instalments.

Siege and Storm picks up after Alina and Mal's escape from the Darkling across the Fold. After trying to live in secret in Novyi Zem, the two are recaptured by the Darkling and brought back to Ravka. After a coup by the pirate Sturmhond, who turns out to be someone completely different, Alina and Mal begin to gather forces against the Darkling. Alina yearns for more power to defeat the Darkling, but at the same time fears it because she doesn't want to become like him. Add in your traditional cliffhanger ending leading the way into the final instalment, and you've got a decent second book here.

The characters make this series for me. The Darkling is still a deliciously troubled villain, his character development is done incredibly well, and his relationship with Alina is one I can't help reading on about even though he's evil because he makes a darn good case as to why they belong together (can't argue with logic, even from a psycho villain). Alina seems a bit more focused in this book, not quite as naive, more dedicated to using her power to help Ravka and realizing her power is a part of herself she cannot stifle. I felt like slapping Mal upside the head for most of the book, about the time he moped around for the hundredth time because Alina was too busy saving Ravka to make time for him. Boohoo buddy, cut the girl some slack, once your homeland is safe you two can cuddle again.

I must say; the addition of Tolya, Tamar, and Nikolai were much welcomed, I loved all three. The twins were awesome pirate bodyguards and Nikolai was just darned charming and two-faced, but really enjoyable.

Recommendation:
If you read Shadow and Bone, you've obviously already read Siege and Storm. If you haven't read these yet, give them a try if you're in the mood for a new series.

Thoughts on the cover:
I like the continuity from the first cover: the Kremlin-esque towers with the Sea Whip curled around and resting at the top. I can't wait to see the cover for the third book.
Posted by Andrea at 8:56 PM