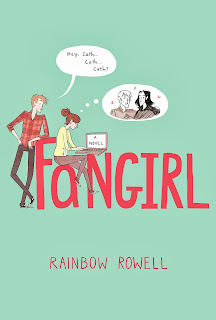 Cath is a Simon Snow fan.

Okay, the whole world is a Simon Snow fan...

But for Cath, being a fan is her life-and she's really good at it. She and her twin sister, Wren, ensconced themselves in the Simon Snow series when they were just kids; it's what got them through their mother leaving.

Reading. Rereading. Hanging out in Simon Snow forums, writing Simon Snow fanfiction, dressing up like the characters for every movie premiere.

Cath's sister has mostly grown away from fandom, but Cath can't let it go. She doesn't want to.

Now that they're going to college, Wren has told Cath she she doesn't want to be roommates. Cath ison her own, completely outside of her comfort zone. She's got a surly roommate with a charming, always-around boyfriend; a fiction-writing professor who thinks fanfiction is the end of the civilized world; a handsome classmate who only wants to talk about words...and she can't stop worrying about her dad, who's loving and fragile and has never really been alone.

For Cath, the question is: Can she do this? Can she make it without Wren holding her hand? Is she ready to start living her own life? And does she even want to move on if it means leaving Simon Snow behind?

Review:
After reading Eleanor and Park back in June, I immediately fell in love with this author, I tend to with authors that portray geek culture in a wonderful way. In this new novel she manages to endear herself to me all the more (which I didn't think was possible) because she writes about a subject very dear to me: fandom.

Growing up, I was a huge bibliophile/anime/fantasy/sci-fi geek; you name it I probably loved it, read fanfiction about it, and plastered my walls with posters of it. I am proud to say I still am a huge geek, but not to the same degree as Cath in the book (but I totally was when I was in high school and university).

Cath is the ultimate Harry Potter Simon Snow fan. She's even the most popular Simon Snow fanfic author on FanFiction.net FanFixx.net, with some readers liking her stories even better than the original Simon Snow novels. When Cath and Wren go off to college near their home in Omaha, Nebraska, everything starts to change. Wren begins to pull away, which forces shy, codependent Cath to expand her worldview, sometimes rather painfully (like Cath living off protein bars and peanut butter for a month because she's afraid to ask where the dining hall is on campus). Eventually she starts to become more comfortable with college life: making friends with her prickly roommate Reagan, having Nick as her writing partner in her Fiction-Writing course, and eventually dating the very awesome Levi, who begs Cath to read her fanfic aloud to him even though he's not a huge fan himself.

There are many reason why I adore this book. First off, Cath is a wonderfully realistic character, smart and witty but very vulnerable and insecure. You get to see her grow throughout the novel but she thankfully never gives up the fandom, she just has more of a balance, so I'm glad the message that being part of a fandom is 'something you need to grow out of' wasn't included here. Also, Cath writes slash fic, which I give huge props to the author for including.

Levi is a great male character, and he and Cath model a really great relationship, which I'm always pleased to see. I loved Reagan, the way she befriended Cath and essentially forced her out of exile had me laughing so hard. The dialogue I think makes this book. The conversations are incredibly realistic, I'm pretty sure I had some of these conversations while in university (and the conversations regarding fandom I'm pretty sure  I still have today). I also appreciated the deeper issues that Cath deals with: the aftermath of her mother leaving and coming back into her life, her dad's breakdown, and Wren's drinking issues. All these were handled quite well I think, adding to the credibility and realism of the book.

Recommendation:
If you've ever been part of a fandom you need to read this, you will love the portrayal the author makes here. Even if you're not a fangirl/fanboy, it's still an immensely enjoyable read with good writing, realistic and relatable characters, and a touching coming-of-age story.

Thoughts on the cover:
I like the scenario on the cover with Levi trying to get Cath's attention but she's preoccupied with Simon and Baz. I also love the aqua colour scheme.
Posted by Andrea at 8:38 PM