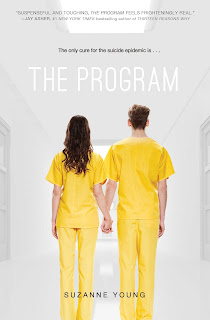 Sloane knows better than to cry in front of anyone. With suicide now an international epidemic, one outburst could land her in The Program, the only proven course of treatment. Sloane's parents have already lost one child; Sloane knows they'll do anything to keep her alive. She also knows that everyone who's been through The Program returns as a blank slate. Because their depression is gone-but so are their memories.

Under constant surveillance at home and at school, Sloane puts on a brave face and keeps her feelings buried as deep as she can. The only person Sloane can be herself with is James. He's promised to keep them both safe and out of treatment, and Sloane knows their love is strong enough to withstand anything. But despite the promises they've made to each other, it's getting harder to hide the truth. They are both growing weaker. Depression is setting in. And The Program is coming for them.

Review:
I picked this up purely because it sounded awesome, I mean a dystopian-esque YA about suicide and the government erasing memories to keep them alive, who wouldn't want to read that? However, since finishing it I have mixed feelings about the novel.

The premise is that Sloane lives in a world where suicide amongst teenagers has become a viral epidemic, so suicide is literally contagious (at least this is the claim). To combat this, the government set up The Program, a recovery program where kids are whisked away to hospital-type rehabilitation centres and return six weeks later with extremely large chunks of their memories missing. Sloane and the rest of her friends know this, so they want to avoid The Program at all costs, hiding their pain when their friends die since any signs of grief mean an automatic call to have the kids taken away to The Program.

I like how the book brings attention to the issue of teen suicide, but I'm not sure if it was handled in a way I'm comfortable with. Though suicide in the novel's universe is supposed to be an epidemic and spreads like a sickness, it wasn't really portrayed this way other than kids tending to fall into depression after witnessing a traumatic event like a friend's suicide (well duh, that already happens). So they're reluctant to seek out help from the various therapy services that are available because they know the therapist will flag them, plus they have no coping skills, so they succumb. This seems to me so very similar to how suicide is understood by teenagers today: they have the signs of depression, they're reluctant to seek help (if they're even aware of it) because there's a negative social stigma attached to it, and because they're lacking appropriate coping skills they just perpetuate a sad cycle. Throughout the book's first part, I kept thinking, "my god, what's wrong with these kids? They aren't 'sick', they just need therapy." I don't think the "suicide as a contagious sickness" was reinforced enough, it just felt like the existing views and misinformation on suicide were just packaged in a different way. I would have felt differently if there was a page somewhere dedicated to listing suicide prevention hotlines and websites but there wasn't. I know it's fiction but because we're dealing with the issue of suicide I feel things should have been handled differently. Definitely have a discussion with readers of all ages (even older teenagers I find don't know enough about mental health issues) if they're reading this.

Aside from the suicide issue, Sloane as the heroine didn't really make an impact on me. She pretty much only exists in relation to James, her only motivation is related to James. Throughout the second part when she's in The Program itself and is getting memories erased bit by bit, her only concern is that she'll forget about James. Not that she might lose favourite childhood memories, not that she might forget about her brother or her friends, just about James. The novel is very much a syrupy love story with a really interesting premise, I was hoping it would be more about a person fighting for the greater good after they have a eureka moment, but Sloane (at least for now) is only concerned for herself and James. I will be picking up the next book to see where this goes though, I really hope I have a different opinion with the sequel.

Recommendation:
This is such a promising idea with a lot of potential but just didn't wow me, though it might just be me, so I encourage you to read it and see for yourself. But please ensure you have a discussion on suicide with teenaged readers regarding this novel.

Thoughts on the cover:
I love it. The clinical white hallway with Sloane and James (I'm assuming that's not Realm) in the yellow scrubs, with the different coloured pills on the back.
Posted by Andrea at 9:46 PM