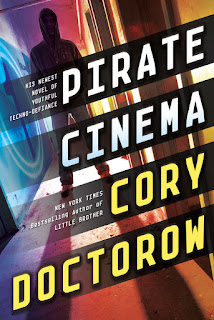 Trent McCauley is sixteen, brilliant, and obsessed with one thing: making movies on his computer by sampling and reassembling footage he downloads from the net. In the near-future Britain where Trent is growing up, this is more illegal than ever; if you're caught three times, your entire household is cut off from the Internet for a year, with no appeal.

Trent is sure this won't happen to him; he's too clever. Except it does, and it nearly destroys his family-his father's living, his mother's health, and his kid sister's studies all depend on Internet access.

Shamed and shattered, Trent runs away to London where he learns how to stay alive on the streets while retaining your self-respect. This drops him straight into the city's always-rambunctious street scene, a demimonde of artists and activists who are fighting a new bill that will criminalize digital copying even more harmless than Trent's, making millions of people felons at a stroke.

Things look bad. The government is in the grip of a few wealthy media conglomerates. But the powers that be haven't entirely reckoned with the power of a movie to change people's minds...

Review:
I'm a fan of Doctorow's works, he does a great job of writing books about modern issues of rights and activism for teenagers. Pirate Cinema takes place in a near-future Britain where the Internet is so widespread that most people's lives depend on it (unlike today where there are phone as well as internet options for most things). So when the the norm is to cut off a household's internet access for a whole year as a consequence for illegal downloading, it can really mess with a family's well-being. Which is exactly what happens to Trent's family after he's caught for the third time. Ashamed at essentially ruining his family, Trent runs off to London and finds himself in an Oliver Twist-like situation where a group of homeless youth take him under their wing and show him the ropes. With the influence of his girlfriend, 26, he becomes involved in anti-copyright activism following the passing of a new, stricter law.

The book is written in the author's typical style: great at explaining techie concepts in a way that newbies can understand (but this can also go on for pages at a time so it can be a drag depending on the reader). This also breaks up the flow a bit, which can be good or bad as well depending on the reader; basically if you're a fan of Doctorow's works then this is more of the same.

The only issues I have with the book are how Trent's teen homelessness is portrayed, as well as the copyright laws issue. While it's true that some copyright laws are downright stupid and hinder individual freedoms and creativity, that's not the case with all of them. Overtime, I witnessed film studios that license and release Japanese animation for North American release die out because people continued to illegally download the films and series instead of paying for them. In cases like that I support copyright law (but nothing drastic like jailing people). In cases where people that have paid for a copy of said film/series and chose to remix bits and pieces of it to unrelated music (anime music videos), fully acknowledging the original sources, that's where I think copyright law should stay out of it. Doctorow solely focuses on the second scenario while ignoring the first, making the issue more than slightly biased.

The glorification of Trent's homeless state is another beef of mine. Trent goes off to London, and in typical 16-year-old fashion, he doesn't have a plan. After spending one night on the streets and one night in a shelter, he magically runs into Jem who teaches him the ways of dumpster diving, and squatting. They live like kings: eating better food out of the dumpsters than they'd have gotten at home, evoke squatter's rights to stay in an old pub, rewiring things to get their utilities, and do nothing outside of the film scene but party, drink, have sex, and do drugs (mostly smoking weed, but still). There are almost no negative side-effects to this lifestyle that readers see, I know it's possible to live off the grid and there are more ways to live aside from the traditional set-up, but the last thing impressionable teenaged readers need is something like this glorifying running off to a major urban centre to be homeless when they can't face their parents.

Recommendation:
If you're a fan of the author's previous works, then you'll like this as well. You might want to have a teachable moment with teenaged readers on some of the issues presented that might be slightly biased (the copyright laws, Trent living the homeless high life).

Thoughts on the cover:
It's nice and dynamic with a great colour scheme, very different from the author's other books though.
Posted by Andrea at 9:30 PM