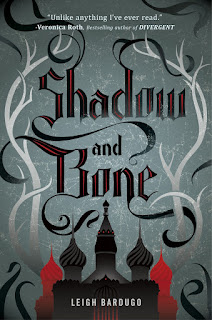 Alina Starkov doesn't expect much from life. Orphaned by the Border Wars, the one thing she could rely on was her best friend and fellow refugee, Mal. And lately not even seems certain. Drafted into the army of their war-torn homeland, they're sent on a dangerous mission into the Fold, a swath of unnatural darkness crawling with monsters who feast on human flesh.

When their convoy is attacked, all seems lost until Alina reveals a dormant power that not even she knew existed. Ripped from everything she knows, she is whisked away to the royal court to be trained as a member of the Grisha, the magical elite led by the mysterious Darkling. He believes she is the answer the people have been waiting for: the one person with the power to destroy the Fold.

Swept up in a world of luxury and illusion, envied as the Darkling's favourite, Alina struggles to fit into her new life without Mal by her side. But as the threat to the kingdom mounts, Alina uncovers a secret that sets her on a collision course with the most powerful forces in the kingdom. Now only her past can save her...and only she can save the future.

Review:
This release had/has a ton of hype surrounding it, especially now that the second instalment is coming out next month (titled Siege and Storm). In my mommy brain haze that occupied most of last year, I missed this book when it first came out, but made up for it by blitz-reading it in under 24 hours. I quite enjoyed the book and will definitely be picking up the rest of the series, but there are a few things that I was able to overlook that I'm sure will annoy other readers.

First off, I liked Alina as a character. She's had a hard life and isn't extraordinary by any means, plus she's spunky and sassy. She's a little too naive at times, which made me yell at her internally during a few scenes, but it wasn't a huge drawback for me. Mal as a character was kind of lukewarm, he didn't get enough 'screen time' to develop in my opinion. I liked Genya as well, but she's a cliche type of character (pretty and slightly self-absorbed, yet well-meaning BFF). The cliche isn't immediately obvious due to the fantasy elements and the Russian-inspired atmosphere, but stick her in a cheerleader outfit and you'll see it. I did like the Darkling and how he was well balanced between good and evil, his trajectory was a little predictable, but I didn't mind it.

The beginning of the novel moved a little slow for me, especially since the world-building isn't explained right away (it happens gradually over the course of the book) and the slam of Russian-inspired vocabulary with no glossary bugged the crap out of me, so the first 100 pages or so were a little hard to get through, but after that point things took off and I was hooked.

Now there's the big one that I know will bug people who know their Russian history/culture/language. The series has a very Russian-inspired feel to it, which I felt was very unique, but in cases like this you need to either adhere to it to a certain degree or leave it alone altogether. Let me explain. Russian vocabulary such as Tsar and kvas is used, but Russian last names aren't used in the proper gendered format (Starkov when it should be Starkova). 'Grisha', which refers to the group of magic users in the novel, is a nickname for 'Grigori'....it's like referring to a group of magicians as 'Jimmy' or 'Billy', which is just plain silly. Now the only reason why I know any of this stuff is because my husband is the Russian enthusiast in our home, my expertise is the Japanese area, but this stuff would surely bother me if someone had set a novel with a Japanese-inspired setting and made these types of 'errors'. In my opinion, you either use a totally original fantasy realm of your own creation and make up your own mishmash language, or you use real-world influences but stick to them. In the case of the latter, I appreciate a well-researched book above all else. So, if you know your Russian you might get super-annoyed with this; but if you don't know anything about Russian language it'll go over your head.

Recommendation:
Well-written and engaging story with some predictability, but didn't detract from the overall enjoyment of the novel. The Russian-inspired atmosphere is wonderful, but leads to some inaccuracies with Russian vocabulary.

Thoughts on the cover:
Wonderfully well-done. I like the Kremlin-esque towers, the dark colour scheme, the wisps of shadow swirling around, and also the stag's antlers bordering the sides.
Posted by Andrea at 10:06 PM