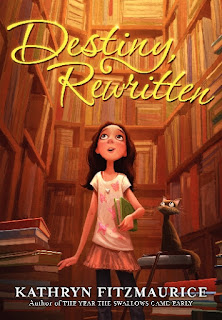 Eleven-year-old Emily Elizabeth Davis has been told for her entire life that her destiny is to become a famous poet, just like her famous namesake, Emily Dickinson. But Emily doesn't even like poetry, and she has a secret career ambition that she suspects her English-professor mother will frown on. Then, just after discovering that it contains an important family secret, she loses the special volume of Emily Dickinson's poetry that was given to her at birth. As Emily and her friends search for the lost book in used bookstores and thrift shops all across town, Emily's understanding of destiny begins to unravel and then rewrite itself in a marvelous new way.

In her third novel, Kathryn Fitzmaurice again weaves a richly textured story about unexpected connections, about the stories that shape our lives, and about the most perfect kinds of happy endings: those that happen just on time.

Review:
I won't lie, the cover initially attracted me to this book; I mean, who hasn't stared up in awe in a bookstore or library like that? Upon actually reading the book, it's more about kids trying to understand the concept of destiny than about reading in general, although there's lots of that going on with Emily's mom being an English professor and her friend Cecily Ann being the poet Emily's 'supposed' to be.

Emily was named after Emily Dickinson, mostly because her mother didn't want to name her after Shakespeare's Juliet due to the association and fear of young death. Coming from someone who doesn't let one bad association tarnish an otherwise good name, I think her mother gave up too early on Juliet (but I would've spelt it as 'Juliette', much prettier), but luckily the name Emily fits the character just as well. She tries to live up to this supposed destiny that her mother thrusts on her when she doesn't even like poetry, and would rather write romance novels; something she doesn't dare admit to her mother...and I don't blame her on this, I know I'd look at my daughter sideways if she told me she wanted to be the next Danielle Steel. Moving on, Emily's book of Dickinson's poetry accidentally gets picked up with the donation pile just after she learns that her mother wrote the name of her (absent) father somewhere in it. Clue the massive search of all the used bookstores and thrift stores in Berkeley trying to find said book so she can find out who her dad is. This whole charade exists in the first place because her mother has a warped idea of fate and refuses to directly tell her daughter the name herself, saying that she'll know if the universe wants her to know kind of thing...can you tell her mom's a hippie?

So after several encounters and adventures and finding the book, Emily resigns her self to a new idea of destiny that she is in charge of her life, and works toward this new sense of self-agency. I can't say more due to spoilers, but there is a happy ending where all things are concerned, and the book is certainly charming throughout the experience.

Recommendation:
A charming middle-grade read, think a literary version of 'The Parent Trap' (not alike in story obviously but in the feel and atmosphere).

Thoughts on the cover:
Since it was what drew me to the book in the first place, I'd say it's pretty good.
Posted by Andrea at 1:34 PM