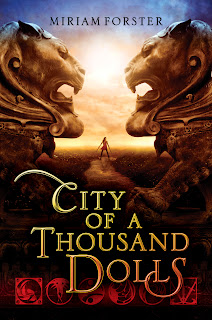 Nisha was abandoned at the gates of the City of a Thousand Dolls when she was just a little girl. Now sixteen, she lives on the grounds of the isolated estate, where orphan girls apprentice as musicians, healers, courtesans, and, if the rumours are true, assassins. She makes her way as Matron's errand girl, her closest companions the mysterious cats that trail her shadow. Only when she begins a forbidden flirtation with the city's handsome young courier does she let herself imagine a life outside the walls. Until one by one, girls around her start to die.

Before she becomes the next victim, Nisha decides to uncover the secrets that surround the girls' deaths. But by getting involved, Nisha jeopardizes not only her own future in the City of a Thousand Dolls-but also her life.

Review:
This book had some interesting hype surrounding it, plus the title was unique, so I decided to give it a go. I'm forever thankful that I did, I can't even begin to describe how much I enjoyed this book, I couldn't return to normal life until I finished it (thankfully my students and coworkers understood ^_~). Thankfully there will be more books written in this universe, because I'm already getting withdrawal symptoms.

To start off, the world-building blew my mind. The setting is a south-east Asian inspired fantasy realm called the Bhinian Empire (I got an Indian feel from it, but that could be just me) that, as a result of the Emperor's two-child policy, needed to establish an estate to care for the realm's abandoned daughters. Not only does the country itself have world-building (the castes, the political structure, the customs, the differences between the sexes, etc.), but the City of a Thousand Dolls itself does as well (how the girls are apprenticed, the competition, the monetary aspect of the Redeeming, etc.). While some authors have difficulty with the bare minimum for world-building, this author manages to simultaneously craft two separate aspects and dole out information throughout the book, so the reader is always adding to the ongoing list in their head. The author had my approval just by doing an amazing job with this, I was immediately immersed in this realm and I loved it (especially after introducing the Sune and the Kildi half-way through).

Not only does the book have an amazing universe to get sucked into, the plot is intricate and engaging. After girls begin to die in the City, Nisha ends up investigating their deaths to try to prove her usefulness. I can't give away much due to spoilers, but it's not an easy mystery to solve, I could guess one of the parties involved but not the others, and the twists were actually surprising. You really feel for Nisha as a character and want her to succeed, she's well rounded and even though she has issues with figuring out where she belongs, she's not annoying as she comes to terms with that.

I loved the cats, I have to say. Jerritt made my day while I was reading this, and I could feel the motherly personality roll off Esmer, I just loved them.

A map would've been useful to help get a visual of the City, but there is a list of characters and what Houses they're from thankfully. The author does have a map listed on her blog, so hopefully that makes it into the future paperback copy.

Recommendation:
Wonderfully written, brilliantly crafted, amazing characters, and even a little romance, what more could you want? One of the best books I've read this year, and can't wait for the companion novel coming next year. If you are a fan of Kristin Cashore's Graceling books; heck, even if you aren't, you will adore City of a Thousand Dolls.

Thoughts on the cover:
The stone lions are what attracted me to the cover in the first place. Plus the colour scheme of reds, golds, and yellows look nice here. It wasn't until later that I even noticed Nisha in the centre of the background.
Posted by Andrea at 8:07 PM