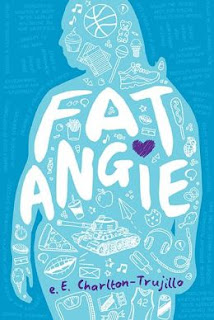 Summary:
From the inside  cover:

Angie is the only one in her family-maybe the only one in the world-who believes her captured war-hero sister is still alive. Angie needs to believe it. It's better than thinking about last year, when she tried to kill herself in front of a packed gym. Better than trying to steer clear of Stacy Ann Sloan and her posse of ultra-mean girls. Better than dealing with her corporate lawyer mother, who wants to know only one thing: When is Angie going to lose exactly twenty-nine pounds?

Then a new girl, KC, arrives in Dryfalls, Ohio. She's beautiful, hip, and smart, and everyone wants to know her. From the minute they meet, KC sees the real Angie, not the fat girl hiding from her pain under a mountain of junk food. She sees Angie for who she really is: someone who just might shake things up-on the basketball court and in KC's life. Outrageous and touching, this darkly comic, anti-romantic romance brings us unforgettable characters on the edge.

Review:
I picked this up purely for the title, not gonna lie. Thankfully my gut decision ended up being right and I really enjoyed the story, especially the LGBT romance angle.

The first thing that endeared me to the book was that, like Angie, I've been the fat girl (though not quite that harassed by my classmates), and I have had a Stacy figure that made my life a living hell. Angie's life sucks so much by many standards: probably dead sister, constant antagonism from her mom and brother, a crappy therapist, a suicide attempt, plus extremely cruel kids at school. With KC's arrival, someone finally stands up for her, which leads Angie to grow a backbone and stand up for herself against everyone, especially her family.

There's so much ground that's covered here: bullying, war, grief and loss, self-injury, family dysfunction, LGBT (non) acceptance, you can't help but feel for the characters and what they're going through. Granted, some characters are more believable and engaging than others. Angie, KC, and even Wang are pretty well-developed and sympathetic. The therapist, the kids at school, and Angie's mom are so narrow and horrible they're almost unbelievable. I know there are bad therapists, cruel kids, and really crappy moms, but to have that many people without an ounce of compassion just seems unlikely, almost as if everyone was recruited to specifically make Angie's life miserable.

I liked how the LGBT romance was portrayed as awkward, where both Angie and KC make mistakes towards each other, it made it more believable. Plus both are flawed in their own way, so no one ends up being the 'saviour' to the other.

The writing is awesome. The style is different, but the way it all blends together makes for not only a very quick read, but a good one.

Recommendation:
A wonderful book full of issues that makes for a great read. There is mention of suicide and self-harm, but it's not too graphic, and the LGBT is handled very respectfully, but you might still want to discuss these with younger readers in case they have questions.

Thoughts on the cover:
I like it. The addition of KC's trademark purple heart is a nice touch.
Posted by Andrea at 2:03 PM