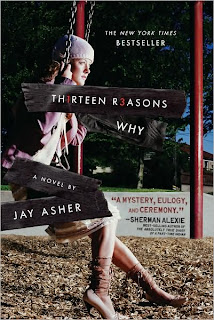 Summary:
From the official book website:
Clay Jensen returns home from school to find a mysterious box with his name on it lying on his porch. Inside he discovers several cassette tapes recorded by Hannah Baker--his classmate and crush--who committed suicide two weeks earlier. On tape, Hannah explains that there are thirteen reasons why she decided to end her life. Clay is one of them. If he listens, he'll find out how he made the list. Through Hannah and Clay's dual narratives, debut author Jay Asher weaves an intricate and heartrending story of confusion and desperation that will deeply affect teen readers.

Review:
There are no words to describe the impact this book has...but I'll try anyway. It's extremely powerful, and knowing the subject matter, you'll understand why. Readers already know that Hannah is dead, but it's her message that keeps people reading. The fact that she recorded tapes to essentially call people out and make them accountable for their part in her suicide, and she does so without any mercy. No judgement is ever made as to whether Hannah's suicide was justified or not, that's not what this book is about. It doesn't glorify suicide, it doesn't downplay it either, it is what it is. It shows readers how much impact they have on the lives of other people: everything snowballs, everything is connected. As I read through the actions of each person Hannah identifies as a reason for her death, I was appalled by the callous nature that was common among every single person, such a lack of empathy. Some of the stories nearly made me cry, simply because I remember these same sorts of events from when I was in highschool. When I think about the impact these events might have had on other people as well as myself, well, you can probably guess that it affected me greatly. My reactions pretty much mirrored Clay's as he listened to Hannah's tapes. It's because of this key message that I think all kids and adults should read this book, because people truly don't realize the power of their actions (adults are guilty of this just as much as kids). The simplest thing you say can have a great impact on someone else, positive or horrendously negative; so before you act or open your mouth, really think about what you're about to do, because you can't take it back.

The dual narrative of Clay and Hannah is really interesting. You see Hannah's voice in italics as Clay listens to the tapes, and Clay narrates his reactions to what he hears and his movements around town while he follows Hannah's map along with her story. It also makes the book a really fast read, or at least it felt like that to me. It also gives two perspectives: we all know what Hannah's opinion of these people is, but it helps to have Clay reinforcing his disgust to make us realize that Hannah isn't being over sensitive, she had a right to be upset about the things people did to her.

I love the fact that the author had Hannah record her story on cassette tapes. Most of the kids who read this book have probably never owned a cassette tape, let alone know how to play one. The throwback to old-school technology was a nice touch.

Recommendation:
Read this. Like Clay, you'll never be the same again...

Thoughts on the cover:
The image is not what I'd imagined Hannah to look like (especially the clothes), but I love her on the swing. There's just something about a grown person sitting alone on a swing that's just sad and lonely.
Posted by Andrea at 5:08 PM