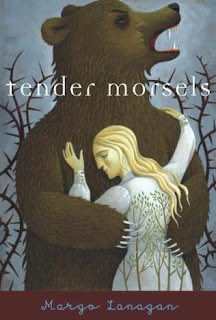 Summary:
From the inside cover:
Tender Morsels is a dark and vivid story, set in two worlds and worrying at the border between them. Liga lives modestly in her own personal heaven, given to her by natural magic and in exchange for her earthly life. Her two daughters, gentle Branza and curious Urdda, grow up in this harmonious world, protected from the violence and village prejudice that once made their mother's life unendurable.

But the real world cannot be denied forever, and gradually the borders break down between Liga's refuge and the place from which she escaped. Having known heaven, how will Liga and her daughters survive back in the world where beauty cannot be separated from cruelty?

Review:
This caught my eye after so many book reviewers blogged about it, and just as many readers couldn't finish it because it was so controversial and brutal. Liga's father rapes her repeatedly, gives her herbal concoctions to abort her subsequent pregnancies; and just when her father's out of the picture, she gets gang-raped by a group of the town boys (all in the first few chapters). Luckily for me, I'm more interested in a book if it is controversial as opposed to not, so stuff like that in my fiction doesn't turn me off that easily.The beginning of the story is brutal and fierce and it will make some people uncomfortable.

Liga's granted her own personal heaven/dream world in which to raise her two daughters (Branza a result of her father's sexual abuse, Urdda the product of the gang-rape). From there on the story resembles a retelling of the fairy tale "Snow White and Rose Red", with Branza and Urdda filling those two roles (complete with a foul-mouthed dwarf and several bear-men). Urdda longs to know the truth and live outside the dream world and finds the entry back to the real world, with Branza and Liga later following. The themes of escapism and living in reality despite what may happen to you are quite clear, and the author makes her point through beautifully written prose. It truly is a beautiful and powerful story for many reasons, and I can see why so many people enjoyed it.

There are a few things that made this book less enjoyable for me. The length and pacing could have been better, you literally could have cut out 100 pages or so and still have the same effect. The middle portion of the story was horribly boring to read through. I don't care about a dwarf having sex with a witch, or the escapades of the village men dressed as bears who turn into real bears upon entry to Liga's dream world (except for Davit because he's actually integral to the story). The book has a great beginning and end (the parts that deal with Liga and the girls), but the middle is a struggle to get through.

Recommendation:
If you have a strong stomach for all sorts of vile and disgusting acts a person can commit to another ('cause if you can think of them, they're in this book), then once you get past the first 50 pages you're in for a beautiful book (minus the boring middle). Although it goes without saying, you probably should not give this to a young child, or a teenager that couldn't handle the material.

Thoughts on the cover:
I love how the cover deals with so much symbolism in such a simple picture. Liga in the arms of the bear-man that we assume is Davit, his face barely visible inside the bear. The whole correlation to men as monsters and monstrous acts committed by men against women is not lost in this image. Also, the live trees in Liga's dress contrast to the thorns/brambles of the real world in the background.
Posted by Andrea at 10:06 PM