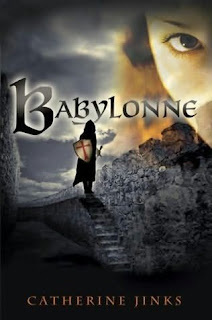 Summary:
From the inside cover:
Early thirteenth-century Languedoc is a place of valor, violence, and persecution. At age sixteen, Babylonne has survived six bloody sieges. She's tough, resourceful, and — now that her strict aunt and abusive grandmother intend to marry her off to a senile old man —desperate. Disguised as a boy, Babylonne embarks on an action-packed adventure that amounts to a choice: trust the mysterious Catholic priest — a sworn enemy to her Cathar faith — who says he's a friend of her dead father, Pagan. Or pursue a fairy-tale version of her future, one in which she'll fight and likely die in a vicious war with the French. Though Babylonne never knew her irreverent father, fans of Catherine Jinks's novels about Pagan Kidrouk will be sure to see the resemblance in his feisty daughter.

Review:
I picked this up on a whim, mainly because I'd read some other books written by Catherine Jinks (Evil Genius, Genius Squad) which were spectacular, so I figured she was one of those authors where almost anything they write is good. Another reason why I picked it up is because I'm a sucker for stories that take place in the middle ages, and since this one has a female heroine it pretty much sealed the deal.

The writing style is what I expected from previous novels, but the narration is vividly different because it's done in first person through Babylonne. Since she's feisty, rude, and a tomboy (to say the least), the novel has a really gritty edge to it, you really get a sense of what medieval times were like for people, especially girls. There's a ton of history involved (both political and religious), you have to read carefully to understand exactly what's going on. The whole gender-bending part of the story (Babylonne dresses as a boy for most of the book) was quite funny, it brought in some humour in a mostly action-based plot. My only issue with this book is that I think I would have benefitted from reading Catherine Jinks 4 previous books about Babylonne's father, Pagan before reading this one. Although Babylonne's book does stand-alone, I think those 4 books would have explained the history of the time much better (even I had trouble following it at times).

Recommendation:
Fast, engaging read with a strong female character. Perhaps not a good choice for people that aren't fans of history.

Thoughts on the cover:
The cover is really well put together: the image of the wall with the knight in shadow surrounded by a dark, foggy sky with Babylonne's face faded in the background. The image doesn't match how Babylonne was described though, she's supposed to look like her father (a Jerusalem-born Arab) with darker skin, but the over shows her as light-skinned with red hair.
Posted by Andrea at 2:24 PM