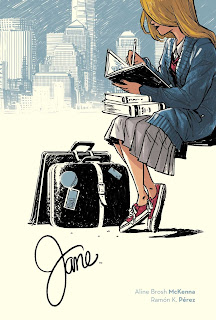 Summary:
From the back cover

Growing up in an unhappy family in a small New England town, Jane dreamed of escaping to New york City to study art and live a life of independent adventure. Soon after arriving, she takes a job as a nanny for a mysterious, powerful businessman, Rochester, and his lovable but lonely daughter, Adele, in a lavish apartment filled with unsettling secrets. Jane soon finds herself drawn into a world of intrigue, danger, and romance that takes her far beyond her childhood dreams.

Review:
I'm a Jane Eyre enthusiast, and like with Beauty and the Beast, I'll read any new version that is released; so of course I picked this up. This version does a great job of updating the story for a modern context: Jane is American, escapes her neglectful, extended family to study art in New York, and becomes a nanny to support herself. Rochester is a business tycoon whose wife was shot by a bullet intended for him, is now essentially brain-dead, and he keeps her in the upper floor of his Manhattan penthouse in hope of a recovery. Jane empathizes with Adele, and in her persistence in getting Rochester to step up and be a more involved father, the two bond and a romance develops.

This version does a great job of certain things but falls flat in others. The opening pages show rather than tell about Jane's childhood and neglectful upbringing using very little narrative dialogue, and a lovely metaphoric grayscale colour palette that slowly emerges to brilliant colour as readers see Jane settle in New York. On the other end, the romance between Jane and Rochester is horribly rushed and doesn't do justice to the original. The conversations that they're supposed to bond over are absent, and it just makes for an unrealistic portrayal of the pair. The art style isn't my cup of tea, but it is nicely done. 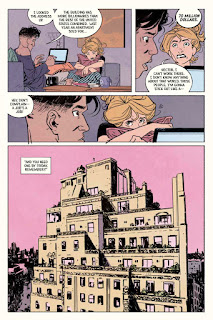 Recommendation:
Worth a read if you're a fan of the original, it's a nice modern take on the tale but not a perfect adaptation.

Thoughts on the cover:
Showcases Jane's personality and the graphic novel's excellent use of colour.