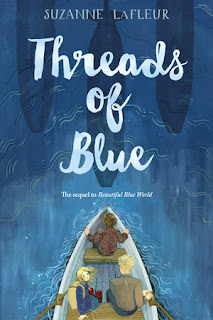 A war took Mathilde away from her family when she was chosen to serve her country, Sofarende, with other children working on a secret military project.

But now the other children - including her best friend, Megs - have fled to safety, and Mathilde is all alone, determined to complete her mission.

In this powerful and deeply moving sequel to the acclaimed Beautiful Blue World, Mathilde must make her way through a new stage of the war. Haunted by the bold choice she made on the night she chose her country's future over her own well-being, she clings to the promise Megs made long ago: "Whatever happens, I'll be with you."

Review:
I read Beautiful Blue World last year and loved it, so of course I knew I'd be picking up the sequel (especially with the cliffhanger ending of the first book).

This book picks up where the previous one left off, with Mathilde on her journey alone to Eilean after allowing Rainer to escape (essentially committing an act of treason). In doing so, she was separated from the rest of the child soldiers, including her friend Megs, and had to travel separately. She eventually makes it to Eilean and is reunited with her Sofarende military contacts while they form a plan of attack on Tyssia. Eventually, Mathilde and Gunnar are asked to go on a new mission that will lead them back into the ruins of Sofarende, all while Megs refuses to speak to Mathilde since her return.

Though I liked Beautiful Blue World better, this novel, like its predecessor, does a wonderful job of viewing war through a childlike lens. Mathilde spends time in a Eilean refugee camp with other Sofarender children and it really highlights how children experience war: worrying about whether family members are alive, trying to survive in a new environment, and worrying about who will take care of you. There's even the experience of rebuilding a war-torn country and the process of trying to locate missing family and resettling. The book even raises ethical concerns about how far one can do to end a war: do you bomb a country, possibly killing civilians, if it means you can force the enemy to leave? Or do you save the civilians and leave the future uncertain?

Recommendation:
Thought not as thought-provoking as its predecessor, this one is definitely worth a read if you enjoyed the story thus far.

Thoughts on the cover:
Beautifully symbolic, as with the first. You see Mathilde, Gunnar, and Rainer in the boat; its a lovely scene till you realize the shadows of the bombs over their heads.
Posted by Andrea at 5:15 PM